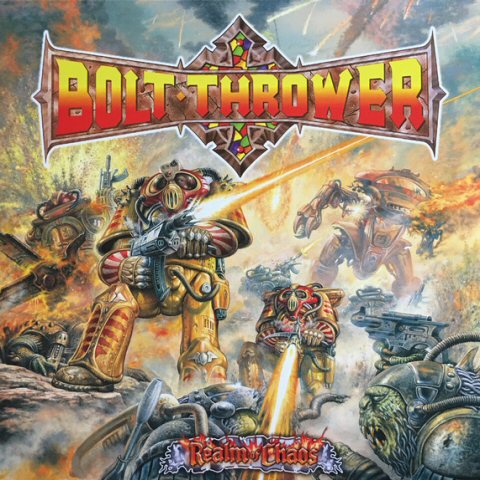 2017 re-issue on black vinyl with insert.

The second full-length from English death/grindcore outfit Bolt Thrower, Realm of Chaos hardly qualifies as one of the band’s best, but the differences between each recording from the war-obsessed Brits are barely distinguishable. Their wash of sludgy, detuned guitars and bass, punctuated with hyper-kinetic drumming and hoarse vocal grunting, is a career constant and very much present on this 1989 Earache/Combat offering. Earlier efforts like Realm of Chaos possess a pronounced death metal flavor that some fans might prefer to the mid-tempo grind of later issues from the group. There are no real highlights on this disc, as each track is nearly identical. The performances are spirited but a little sloppy, adding to the music’s anonymous quality. Listeners curious about Bolt Thrower would be wise to check out the band’s mid-’90 releases before entering the Realm of Chaos.