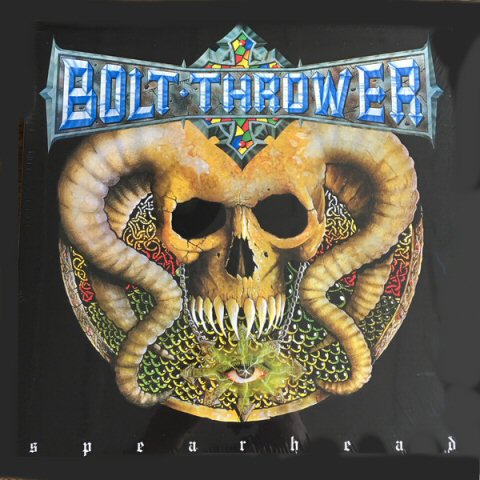 Spearhead 1992
The 1992 Spearhead single is basically all about the two b-side leftovers from the IVth Crusade sessions: Crown Of Life and Lament. Both tracks deliver exactly what you’d expect from Bolt Thrower: heaving vocals, caustic riffage, chugging mid-tempo double bass beats, and the occasional swing tempo breakdown. Pretty much perfect by any acceptable standard of what makes for great Bolt Thrower. Dying Creed re-appears from the original recording session and is thus wasted in its appearance (great song though). As well, the extended version of Spearhead drags a bit with the additional two minutes of music not really doing favours to a song I already thought was overlong. Still better to have a different version here than the album one.

Cenotaph 1991
After two raw albums that belong to the history of death metal, Bolt Thrower in 1991 were back with this EP made of 3 studio songs and a live one. We must say that the death metal here is still fucking heavy but a bit better structured and less chaotic. Since the opener (the title track) we can hear the new production, clearer and powerful and the new group’s approach to a more structured death metal. The beginning is quite slow, with only the bass drum speed and some good melodic guitar lines. Well, here the melody is truly obscure and surely not the one in melodic death metal, so don’t worry! The vocals are more growly than in their past albums, that were in more Cronos style. The beginning to Destructive Infinity is very doom and the whole track reminds me Grave from Youll Never See album. Massive mid tempos, fast bass drums and raw vocals. The truly obscure guitar lines are always well set in the songs to give a funeral atmosphere. Prophet Of Hatred is more Swedish in the guitar sounds and feature the first blast beats and up tempos. With this track we return a bit in the past when the group was more raw. Good song with tons of pure violence. The live recorded track is a bit chaotic but you can hear the instruments quite well; surely it shows the group’s live violence. What I did not like is the strange echo in the live vocals…anyway nothing terrible. A good EP, that shows a musical improvement by the group, shown also in their album after this.