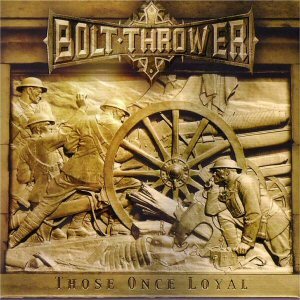 Bolt Thrower -Those Once Loyal lp

Re-issue with gatefold cover and poster

Pressing play on a new Bolt Thrower album is a lot like opening the lid to your favorite pizza. The package may look a little different, but inside you know exactly what you’re going to get. The Birmingham, England, natives have been singularly obsessed with the brutality of war as filtered through guitar, bass, and drums since the late ’80s. They’re dependable to a fault, and that’s either a strength to those who love them or a weakness to their detractors. On their eighth studio album, Those Once Loyal, fat riffs wrap themselves around a relentless rhythm section that can go from thrash to midtempo doom metal at the crack of a rifle. Longtime fans will celebrate the return of original vocalist Karl Willetts, as his death metal croak is significantly deeper than previous vocalist Dave Ingram, adding a weight to standout cuts like “At First Light” and the serpentine title track. Those Once Loyal may not break any new ground for the band, but one would be hard-pressed to find a better use for the term death metal.