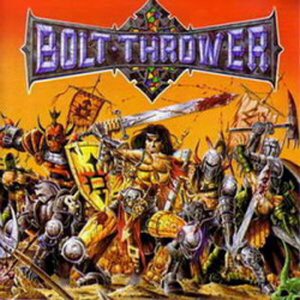 2017 re-issue on black vinyl with insert.

Although it never appealed to mainstream rock audiences, Bolt Thrower wasn’t quite as extreme as some of the other bands on England’s metal-oriented Earache label (which signed a distribution deal with Combat in the early ’90s). Compare Warmaster to Carcass’ very hardcore Symphonies of Sickness, and you’ll see that this blistering death metal release is a bit more accessible. Lead singer Karl Willetts favors the type of choked, grunting vocals that underground grindcore bands were known for, but unlike such bands, Bolt Thrower isn’t always heard at breakneck speed. Bolt Thrower often slows down the tempo, making the morbid lyrics to ‘The Shreds of Sanity’, ‘Destructive Infinity’, and ‘Profane Creation’ easier to understand. This is an album that seasoned thrash fans will find invigorating.