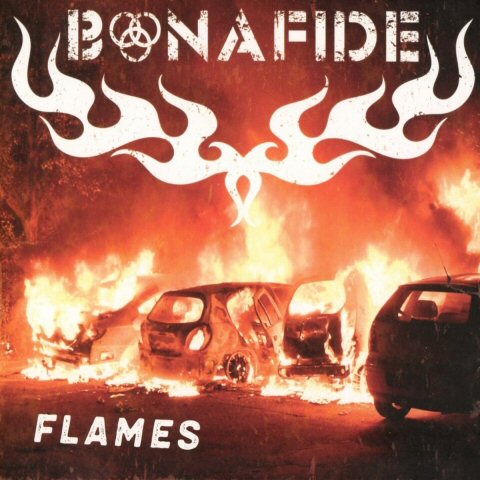 One of the most consistent – and perhaps underrated – bands on the circuit, Bonafide are celebrating their tenth anniversary with “Flames.”. Time flies and all that. You can’t accuse them of letting the grass grow in that time, either. “Flames” is their seventh album, plus there’s been almost constant touring in that time (plus main man Pontus Snibb plays blues shows whenever there’s time and drums for kings of country punk Jason And The Scorchers). At this point too, you know what you’re going to get from Bonafide and “Flames” is no different. Ten songs of bluesy hard rock with a similar spirit to Bon Scott era AD/DC, that expertly played and tremendous fun. Take “Bottle Of Jack”. In those four minutes, just about halfway through the record, every single cliché of life on the road with a hard rocking band is cheerfully explained. Whether it’s like that, we’ll never know, but that’s the point. This is rock n roll as escapism, the way it used to be. From the soaped up opener, “Back In Flames” – and you can almost see Snibb racing out on stage to play it with fists pumping – this is glorious. “Smoke And Fire” swings and grooves and shakes its hips at you in a most suggestive way, and if you can get through “Power Down” without nodding your head in time with the riff, then this record ain’t for you. That’s not to say, however, that “Flames” is a merely a brainless pastiche. These boys are far too savvy for that. “Written In Stone” is better than that too. With its superb use of backing vocals and its countryfied styling’s, it’s almost what Credence Clearwater Revival would have done if they’d been a hard rock band. There’s plenty of reason to think that Bonafide might be one of the finest retro themed rockers we have. They are steeped in it too. The Stones-y “Flipside Groovin’” proves that. “The b-side is where the magic’s at/ a different style and I like it like that” sings Snibb, and you know what? We were all like that once. Bonafide ends this record with the wonderful ballad “Under Your Spell” which finds some real soul-filled goodness in its work, there is every reason to suppose that the next ten years could be even better than the first. “Flames” might just be their best album to date.