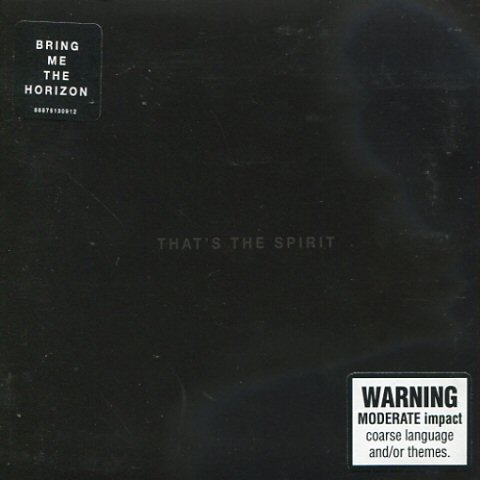 Bring Me The Horizon ‎–Thats The Spirit cd

Reduced price because the cover have clamp marks

The 2013 release Sempiternal saw the English decibel pushers more or less obliterating their deathcore past with a soaring set of aggro-alt-rock anthems that were as darkly lush as they were emotionally punishing. That’s The Spirit, Bring Me The Horizon’s fifth studio long-player, completes that sea change by incorporating more electronic elements into the mix and moving even closer to the mainstream via a bevy of meaty, melodic hooks and fist-pumping, stadium-ready choruses that invoke names like Linkin Park, Avenged Sevenfold, 30 Seconds To Mars, and even late-’90s Metallica. What they haven’t left behind is the generalist angst, as evidenced by second-hand embarrassment-inducing gems like “True friends stab you in the front” and “My heart’s a hieroglyph, it talks in tongues,” but Bring Me The Horizon’s penchant for wallowing in social dystopia is tempered by their newfound proclivity for dabbling in big, unabashed pop pageantry. That they manage to keep the edges of those populist tendencies razor-sharp is what keeps That’s The Spirit from dissolving into a puddle of alt-rock/nu metal bandwagon treacle. Standout cuts like “Throne,” “Drown,” “Doomed,” and, most auspiciously, the fevered, pom-pom-led “Happy Song” are as snarky as they are apoplectic, with frontman Oliver Sykes, who relies almost solely on his clean voice this time around, delivering the bad news with measured conviction. What’s most surprising is how natural it all feels, but that’s due in large part to the long-form recalibration of the band’s sound. By entering the mainstream one limb (album) at a time, Bring Me The Horizon are merely reaping what they’ve sown, and longtime fans should already feel acclimated to the water.