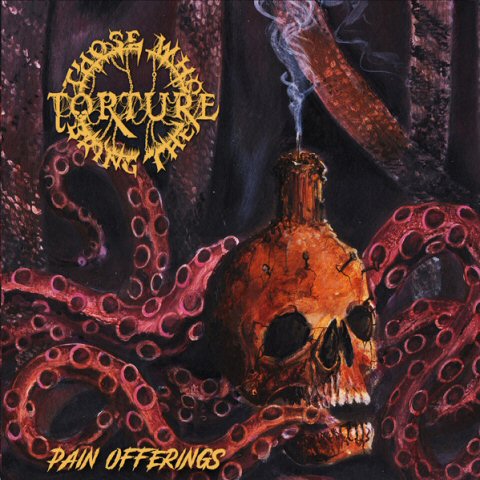 Those Who Bring The Torture ‎–Pain Offerings cd

The long-standing Swedish death metal act Those Who Bring The Torture aren’t going to surprise many when releasing a new album. While the act has had some shifts over the years (they did start as a death/grind hybrid), more recent efforts have focused more on a purely death metal level. Which sixth full-length Pain Offerings is happy to deliver more of to the devoted. While the mere mention of ‘Swedish death metal’ may instantly usher in thoughts of Entombed/Grave copycats, Those Who Bring The Torture maintain a more timeless feel. If any band works as a comparison, the way that they dive into more melodic (without being too melodic) territory feels quite akin towards that of Hypocrisy. While they frequently do dip into some driving tempos, such as the ending of the monstrous “Endquester” or frantic yet melodic “Enter The Damned,” the epic scale and grooves kick in for cuts like “Reality – Worst Show Ever” and title track. It’s catchy, it works, and it’s certainly going to leave many with a sore neck. With a sneaky approach to getting those melodies in, it keeps the songs from sounding too similar to each other, even if the formula is admittedly well-worn. The equivalent of death metal fast food, Pain Offerings is quick, easy, and convenient death metal for those who want all of the fury and venom. It can interject melodies and groove into a pummelling formula with little effort – offering some big flavour, even if it does feel quite familiar. So if you have some lingering love for the first 3-4 Hypocrisy albums, Entrails, Amon Amarth, Uncanny, and stuff that employs a non-Gothenburg style of semi-melodic death metal there is a good chance you’d likely enjoy this sixth Those Who Bring the Torture album.

Track list:
1. The Hangman And The Hanged
2. Another Victim Of Insanity
3. Reality – Worst Show Ever
4. Endquester
5. Mental Meltdown
6. Pain Offerings
7. Enter The Damned
8. Onwards To Termination
9. Interlude Before The End