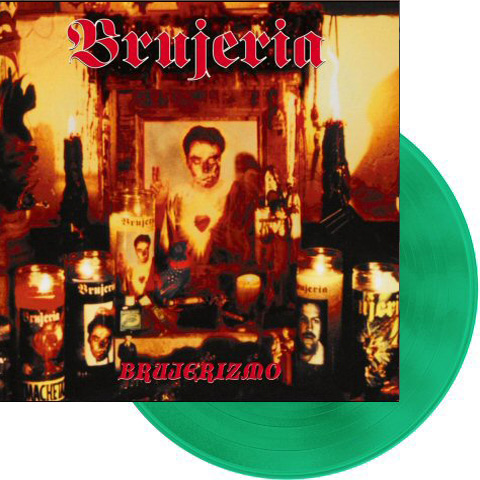 On Brujeria’s third album, “Brujerizmo” the band once again evolve their music, albeit closer to what their second album sounded like more than their first. All the elements that make Brujeria a cult favourite are in place. The Spanish vocals, the crunchy Fear Factory reminding riffs and the crazy, tongue in cheek song lyrics. Although defined by a bit more seriousness and discretion, Brujeria still have some issues. From the invocation of witches for sexual pleasure, the tribulations of constant drug abuse and partying, to drug trafficking and, well, “cumasauruses”, you can’t help but flash a smile every once and a while at their deranged sense of humour. But it’s physically more so than mentally that Brujeria have changed. First of all, they have modernised their sound. The once dodgy production of Brujeria albums has now been replaced with crystal clear production. Everything is audible, from the guitars, to the drums, to the bass, to the vocals, everything is easy to process and therefore easier to listen to. Of course, for fans of “Matando Gueros” though this could be considered a shortcoming. Second of all, there’s not a blast beat in sight. While the speed is there, this isn’t grindcore anymore. Brujeria have more or less let go of their grind roots and decided to focus on something more refined, more “progressive” if you must. That’s not to say that there isn’t double kick-drums and fast tom-tom rolls, those aspects are present, but the overall impression is that Brujeria have brought down the tone a little bit. It’s not only in the rhythm department that Brujeria have changed, but also in the guitars and vocals. The vocals aren’t the same guttural cookie monster that they used to be. In fact, on this album Brujeria Juan Brujo shows that he’s capable of more than making noise. He still growls, but not all his growls are the same, there is more variety, including the occasion scream. Moving on to another aspect of the music, the riffs are more structured this time around giving the album a much better flow than previous Brujeria albums. The songs develop ideas much more smoothly than those of yesteryears and there are even subtle moments of, dare I say it…melody. Yes, it’s true. Brujeria have indeed evolved into something quite special. From start to stop, “Brujerizmo” provides the listener with thrills and chills, bangs and crashes and more catchy, head-banging moments than you can shake a bloodied machete at, but it’s no “Matando Gueros”. Anyone looking for the aural carnage of “Matando Gueros”, or even “Raza Oidiada” will be left with a strong bitter taste in their mouth, but those looking for a much more mature and alternative Brujeria will be foaming at the mouth for more. So, get crashing!