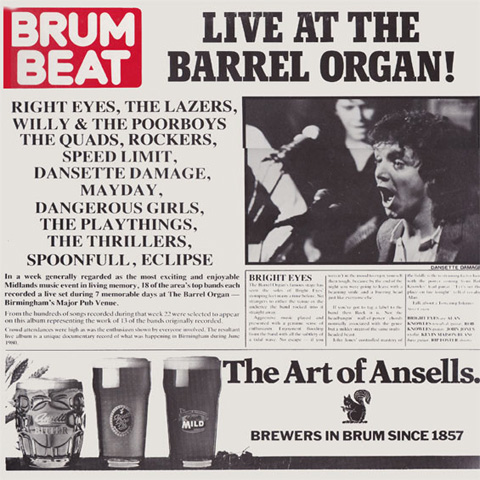 Brumbeat, which originated in the British manufacturing capitol of Birmingham, was never remotely as well-known or recognized (at least, outside of Birmngham) as the Liverpool sound called Merseybeat or, for that matter, as familiar as the so-called “Tottenham Sound” embodied by the Dave Clark Five. Brumbeat, such as it was — the term derived from the local slang term for Birmingham — was also never as unified a sound as Merseybeat, possibly because it followed in its wake, and also because Birmingham was a bigger city with more hands involved in making music, from more different angles; and there was no one managerial figure, such as Brian Epstein, who dominated the field with his taste and perceptions in quite the same way in the early years; by the time “Brumbeat” was perceived — though it could be argued that the term was really a creation of the music press looking for a story circa 1964-1965 — British rock & roll music was already being perceived as a goldmine on an international scale. The Brumbeat term seems to have survied. In June of 1980 Birminghams major pub venue put together 7 days of live music featuring 18 of the areas top bands at the time. The music this time however is far from the 60s rock. The summer of 1980 in England was more about punk rock, new wave, power pop, Ska and hard rock. 13 of those 18 bands were chosen to be on this double album. Its an unique documentary of what was happening in Birmingham at the time. Fans of NWOBHM should take notice on the band Spoonfull who were active between 1976 and 1980. They then changed name to Blitz and supported Budgie on their tour. Then changed name again to Shy Wolf before calling it a day in 1985. Spoonfull only released one single in 1977 and these two tracks in 1980. The single is more pub rock early hardrock and the band turned more and more into a hardrock/heavy metal act during their career and name changes.

Track list:
1. Bright Eyes -The Lonely Ones
2. Bright Eyes -Casablanca
3. The Lazers -Headache
4. The Lazers -Rivet
5. Willy And The Poorboys -My Babe
6. Willy And The Poorboys -Hoy Hoy Hoy
7. The Quads -When Everything Is Said & Done
8. The Quads -Wonders Never Cease
9. Rockers -It Takes A Thief
10. Speed Limit -Alright On The Night
11. Speed Limit -CJ
12. Dansette Damage -All Little Girls Taste The Same
13. Dansette Damage -Invaders
14. Mayday -Moving In Time
15. Mayday -Standing On The Edge Of The World
16. Dangerous Girls -Demolition
17. Playthings -Sally Daydream
18. The Thrillers -To The Top
19. The Thrillers -Breakout
20. Spoonfull – On Your Trail
21. Spoonfull – Nine Til Five
22. Eclipse -Enjoy Yourself