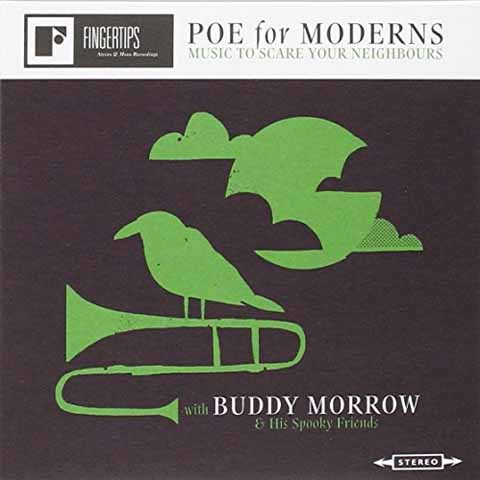 Halloween is simply an excuse to immerse yourself in some decent (or trashy if you prefer) horror films. You’ll also need something to read and, most importantly, some suitably spooky tunes. The Cramps and the John Carpenter Halloween soundtrack should be on constant rotation and if you were going to choose a poet you couldn’t go far wrong with a dash of Edgar Allan Poe. Poe has had a fairly broad influence on popular culture, after all, with everyone from the Simpsons to The Beatles having shown their appreciation for the works of the master of the macabre. You could be forgiven for not having heard of Buddy Morrows jazz-horror obscurity Poe for Moderns, however. The album was originally released in 1960 and has been widely unavailable for some time; this re-issue sees the original 12 track album combined with no less then 18 extra tunes (under the banner Spooky Sounds for Scary Moments). What’s more, Poe for Moderns and Spooky Sounds are distinctly unique entities. Poe for Moderns is certainly a pretty strange album and probably not the kind of album you’ll find yourself listening to on a daily basis. That’s not to say that Buddy Morrow and his Orchestra don’t do a fine job bringing Poe’s poetry to life. While my earlier description of ‘jazz-horror’ may have brought to mind the far-out sounds of the Sun Ra Arkestra, the album is actually a fairly laid-back affair. Think old black and white films, The Singing Detective soundtrack and, I don’t know, the incidental music from The Pink Panther cartoons. Not every track has vocals but the ones that do definitely work the best. Take the creepy spoken-word ‘Annabel Lee’ and you can almost picture Nick Cave relaxing to it in his study (in the basement). ‘The Raven’ takes Poe’s best known piece and, appropriately, turns it into a maddening, but catchy, song. ‘The Bells’ stands out among the jazz noodling’s as a particularly odd, Phil Spector-esque pop-tune. It’s an interesting oddity and certainly sets the mood for Halloween. Spooky Sounds brings together a host of (mainly) obscure rock ‘n’ roll bands from the late 50s and early 60s; all of them obsessed with b-movies, the burgeoning teen culture and Chuck Berry records. There’s also tonnes of humour here; I mean a song called ‘The Purple People Eater Meets the Witch Doctor’ (by Joe South) was never going to be too serious. I’d be surprised not to find some of these records in The Cramps personal collections. Highlights include John Zacherie with ‘Dinner with Dracula’; which contains the lyric, “The waitress, a vampire named Perkins was so very fond of small gherkins/ While she served the tea she ate 43/ which pickled her internal workings/Ha ha ha!” Quite possibly the best lyric I’ve heard in some time. Spooky Sounds is filled with saxophone solos, 1950s sci-fi sounds and some brilliantly fun and imaginative rock ‘n’ roll; there’s not a weak moment over the entire 18 tracks. Overall, this is a really unique package and would go down a treat at any Halloween gathering you may be having. Having said that, the songs on the Spooky Sounds for Scary Moments section are far too good to be resigned to once yearly plays; this is classic rock ‘n’ roll. As the helium-filled, pre-Butthole Surfers voice says on the aforementioned ‘The Purple People Eater’:”Yeah man, you’re ugly but you sure can play”. Can’t argue with that. A very cool sound.

Track list:
1. The Murders In The Rue Morgue
2. Annabel Lee
3. The Gold Bug
4. A Decent Into The Maelström
5. The Bells
6. The Fall Of The House Of Usher
7. The Pit And The Pendulum
8. Ulalume
9. The Black Cat
10. The Raven
11. Quoth The Raven
12. The Tell-Tale Heart
13. Bo Diddley -Bo Meets The Monster
14. Big Bob Kornegay -At The House Of Frankenstein
15. Carlos Casal Jr. -Don’t Meet Mr Frankenstein
16. John Zacherle -Dinner With Dracula
17. The Spiders -Witchcraft
18. Archie Bleyer -The Rockin Ghost
19. Joe South -The Purple People Eater Meets The WItch Doctor
20. Bob McFadden And Dor -The Shriek Of Agony (Shriek Of Agony-Cha Cha Cha)
21. The Coasters -The Shadow Knows
22. The Monotones -Zombi
23. The Symbols -Do The Zombie
24. Tony And The Monstrosities -Igors Party
25. Bob Luman And The Shadows -The Creep
26. Leroy Bowman And The Arrows -Graveyard
27. The Zircons -Frog In The Fog
28. Al Reed And The Blue Notes -Hoo Doo
29. Jackie Morningstar -Rockin In The Graveyard
30. Nervous Norvous -The Fang