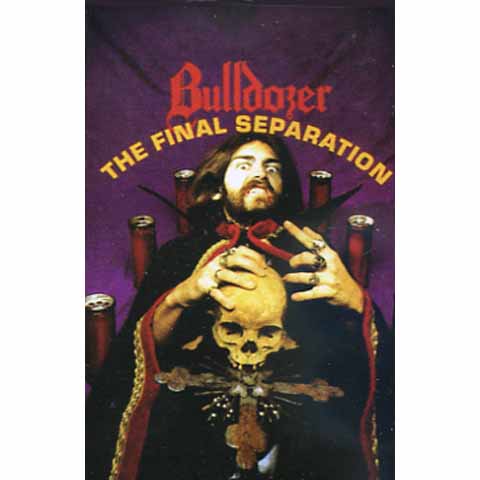 The second album by the Italian black/speed/thrash metal legend Bulldozer came one year after the debut album, The Day Of Wrath and features more or less the same characteristics that contribute in making this band a true legend even outside the home country. The Final Separation is the second confirm of a good quality band. For all its length, the nastiness of the speed metal and the brutal influences of bands like Venom and Motörhead collide to create another high impact effort, in pure 80s style. So, forget about technique or elegance because here we enter the Bulldozer world and try to survive it! We immediately face the title track with its ethereal sounds and arpeggios. The drums show immediately a far direct approach with really raw sounds and the guitars finally enter. The atmosphere is always gloomy and desecrating and we settle down on mid-paced progressions for the vocals to enter. They are always heavily Cronos influenced but growler. The speed metal restarts after the symphonic breaks are just obliterating and the riffs are truly fast. The guitars solos are not too fast but louder to add more darkness to the sound, while we go on with the sheer speed and brutality of “Ride Hard-Die Fast”. The up tempo and the riffs are definitely more thrash metal oriented as we meet some more melodic touches by the chorus. The dirty rock’n’roll influences are heavier on “The Cave” song. The guitars have plenty of them as the drums follow a sort of Hellhammer up tempo style. The good solo after the drums one is to remark for its goodness and its addition of melody. The arpeggios parts are scary even for the distorted vocals. “Sex Symbols’ Bullshit” is a truly in your face track, like the ones we could find on higher quantity on the debut album. The fast bass drums beats are constant as the riffage always conserves that incredibly hard rock touch, but on speed. With “Don Andras” we reach the top in hilarity! The vocals and the melodies have plenty of the stereotypes from Naples and south Italy. The tempo is fast and the riffs even more but the atmosphere is fun and really crazy! “Never Relax” has a kicking drums intro to continue on speed for the up tempo and the fast bass drums patterns. The vocals are again low and dirty, while the riffs switch many times in style, from the hard rock influences to the classic speed ones. The breaks are just massive for the truly massive riffs and the dark atmosphere it’s recreated. “Don’t Trust the “Saint”” has another drums intro and it introduces a savage speed metal riff. The up tempo is always present, as well as the fast bass drums work. The chorus is quite catchy too and this is very important. Even if the structures are quite simple on these songs, they are all quite enjoyable for the genre, without being terrific or awesome. Once gain, the best parts come with the solo and the impulsive, relentless restarts. The last “The Death of Gods” features again those ethereal and occult atmospheres with long arpeggios sections and dark sounds. When the heavy instruments enter, the tempo remains doomy, privileging the atmosphere and the dark touch. The vocals are ritualistic too on some parts and the solos are always there to accompany us with a hint of melody. All in all, this is another good confirm of the goodness of the Bulldozer’s sound back in the 80s and it’s good to recommend it to the old school fans of this lethal black/speed combination.