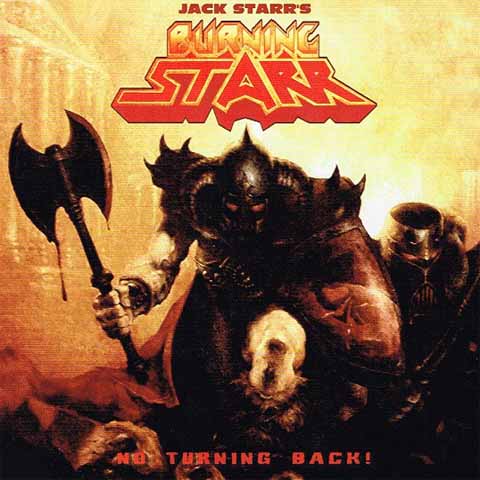 Jack Starr was absolutely all over the place back in the 80’s. Just take a peek at the majority of the bands he’s been a part of and you’ll see. Its as if he was in the process of creating four to five different bands simultaneously. Virgin Steele was active and had released a few albums in the early 80’s, while Phantom Lord was starting up and had a few albums put out, the same for this band Burning Starr, the original band he started (self titled under his name now) was supposed to be the real Virgin Steele and had a few releases under its belt too, the short lived Strider would arise towards the late 80’s, and who’s Devil Childe? Yeah, I have absolutely no idea what’s going on here. He’s just bouncing off the walls with different bands left and right. Apparently a lot of Burning Starr’s material was taken from the more ill faded Phantom Lord. What I can determine is that Burning Starr was probably his second strongest band that he had forged back in the day, next to Virgin Steele. As always Jack Starr seems to make it apparently easy to get a solid line-up. With just about everything he’s been a part of, an excellent voice would be singing those soaring notes at ease. Mike Tirelli who would go on to live a pretty successful career in metal, does a fantastic job here. Like most vocalists under Jack Starr’s radar, Tirelli is much more of a melodic singer than anything else. He’s pretty comparable to John Leone (RIP) from Starr’s Phantom Lord, or more infamously known for his role on vocals for Attacker’s “The Second Coming”. Overall he’s pretty similar to David DeFeis’s old singing as well, just maybe not as over the top and as distinguished. Jack Starr is practically a no brainer, though he doesn’t really leap beyond any boundaries, his performance is top notch with his excellent guitar work. Both the bass and drums never really stand out as their own force, but they fill those gaps and completely fortify this album. And looks who’s doing keyboards here! Virgin Steele’s David DeFeis himself. Fans shouldn’t get too excited just yet though, as there’s not nearly as much of a focus on the keyboards here as there always has been with Virgin Steele. DeFeis seems to mainly fill his role with these piano driven interludes, Prelude in C Minor and Coda. From there he’s pretty much just there for a little atmosphere from time to time, but it hardly ever stands out. For some this could be good news and for some bad. Though the notes on this album’s info page do note DeFeis was involved with the production, so its good to have him around. Because of this its no surprise the production is pretty good and very comparable to early Virgin Steele. As usual Jack Starr’s style always seems to be a little lop-sided (seemed like this used to be the case for David DeFeis as well, back in the day). Sometimes he’ll put out an incredibly awesome song that just screams metal, and after that you might be hearing something that sounds like nothing but hard rock. So it could probably be argued there’s a little case of inconsistency here, just like early Virgin Steele. Then again maybe he’s just so extremely influenced by the classics. The tracks Fire and Rain, Road Warrior, and Run for your Life tend to gravitate towards this sound. Though honestly not bad tracks, they do feel a little held back and or just too relaxed. The impressive solo’s do save them from being ‘bad’ tracks however. Out of the three interludes here, Coda easily surpasses them all. Prelude in C Minor is purely all pianos, while M-1 is only guitars. Coda fuses them both and it works perfectly. The majority of this album is pretty strong. Most tracks are faster paced with galloping rhythm’s and beats, topped off with some incredibly catchy choruses. For me the greatest track on here is hands down Light in the Dark. Its a bit darker than the rest and gives off an extremely majestic feel, Tirelli’s vocals seem to be at their peak, and the atmosphere is just great. Definitely a track that really sticks to your mind after listening to it. If you’re a fan of Virgin Steele, especially their older works, it’d be extremely wise to check Burning Starr out (specifically this album!). Its not that Burning Starr sounds like a copy-off or a rehash of what Virgin Steele was, just a very complementary band to their majestic style. You don’t get closer to Virgin Steele than Burning Starr does, and vice versa. Definitely one of Starr’s better projects.