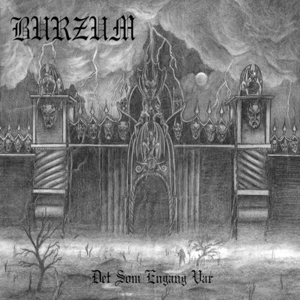 Det som engang var, what once was What an oddly appropriate title for this masterful release. Odd because at the time of its release, the title didnt bare any relevance to the state of this band, but as time went on it became more and more fitting. For it seems that Burzum will never again record anything quite like this album, Varg has moved on to new territories and it seems he isnt looking back. However, this is by far my favorite work of his, as the sound here a much more matured and refined version of the style featured on his self-titled album and the Aske EP. So fittingly this is what once was of Burzum, and sadly, what may never be again. Of this albums purely musical qualities, the guitar work is by far the best. Varg uses a variety of different techniques, creating quite a few distinctive groups of excellent riffs and leads that are all different enough from one another to truly make the album sound diverse but not so much that it falls apart. Much of this album consists of rather traditional sounding chord progressions that have a clear first wave black metal influence, yet this seems to be forgotten by many of its critics. One can clearly hear the Celtic Frost influences pouring from Vargs guitar in songs such as Key to the Gate and Lost Wisdom, for example. The most prominent techniques used here, and the one this album is most famous for, is the slower, depressive (as it has come to be known) style. Varg uses this to create compelling riffs that truly shine by being as dark as possible; thriving on an unforgiving sense of dissonant minimalism. While these certainly dont take as much sheer guitar skill to play as the aforementioned first wave riffs, they are so skillfully crafted that they strike me with amazement every time I listen to this. Other times Varg takes the same minimal style but puts a consonant twist on it, creating absolutely magnificent lead melodies that flow through the songs with an almost indescribable beauty. All these styles contrast nicely with each other. The more overtly consonant melodies dramatically clash with the dismally dissonant ones and the somewhat lively first wave riffs with the depressive ones. Another big knock on this album is about Vargs somewhat odd vocal presentation. He uses a rather exaggerated scream that is quite high-pitched and raspy, and at times, sounds as if he is actually groaning in pain. Some may call it melodramatic or overdone. It accompanies the guitars and the overall atmosphere of this album very well, as all of them are very passionate and emotional. During some of the slower songs, he also uses a deep, dark but clean singing voice, and this sounds great as well. In addition to the black metal tracks, there are three dark ambient songs on this album, all of which are of about the same quality. They all carry more or less the same aesthetics and work in the same ways that the black metal songs do, having that excellent isolative atmosphere. However, all three are constructed quite differently. But from the somber, slow-moving Den Onde Kysten, to the epic grandeur of Han Som Reiste, to Svarte Troner dissonant industrially tinged soundscapes, no one of these songs are any less than excellent. All of them showcase Vargs talents for creating brilliant ambient melodies and deeply immersive atmospheres (both of which would be shown even more later on in Vargs career with his two entirely ambient albums). Although, I must admit, all of these tracks sound very synthetic, Im guessing the keyboard he used was of pretty poor quality. This is a stunning piece of music of incredibly high quality. The guitar work, the vocals, the song-writing, the ambient pieces, and the overall atmosphere; all the elements work perfectly on their own and together, creating one of the most engaging listening experiences ever.