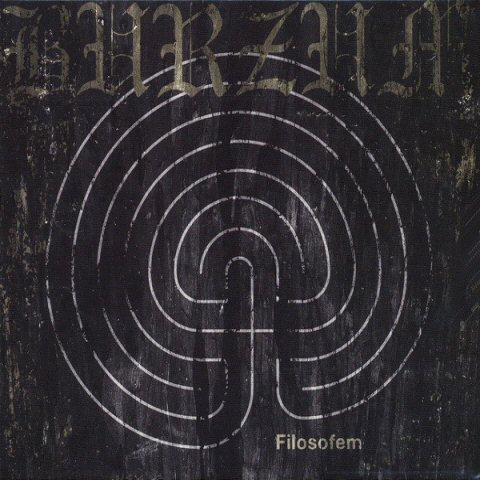 2010 re-release on Varg Vikernes own label with new liner notes written by Varg himself. This album features the original cover artwork inside with a slipcase featuring brand new exclusive artwork outside

Perfecting a work of art is not necessarily a manner of creating something that is universally accepted as great by all, in fact I actually believe the opposite is often true. It is more a manner of taking the image/sound within oneself and translating it exactly as it was envisioned outward. Whether or not it is recognized as such often depends on what the listener is looking for. Insofar as Vargs heavily philosophical and atmospheric, six chapter offering Filosofem is concerned, the goal is to force the listener to lose himself in a somber haze of ambient sadness, in many cases leaving the realm of metal entirely in the process. Unlike most albums that are so consistent and lacking in subtlety, there is the potential for a listener to view this as middle-of-the-road quality rather than the extreme of sheer genius versus horrid failure. The first half of this album is situated well within the black metal paradigm, though it is heavily minimalistic in comparison to previous works and is so utterly fuzz drenched that it seems to induce the pain followed by equalization that the ears experience when under water, particularly to ears already familiar with Vargs former works and other renowned black metal releases of the Norwegian scene. The layering of guitar tracks produces a sound that is very much similar to the experience of being submerged, though the presence of the drums anchors the sound and gives it appeal to those who prefer the metal oriented works of Hvis Lyset Tar Oss. Perhaps perfection is a subjective concept, and there is a thin line between madness and genius, so whatever Vikerness is a genius or just mad might be something to argue about but whats sure is that Filosofem is a piece of art on album thats definitely not easy to listen to, especially when considering the active effort at making its production quality both a razor to cut away superficial listeners from its presence and a non-issue in the determination of this albums merits. Filosofem is a testament that musical greatness is not solely found in how much you put into something, but in the quality of the ideas that make it out of the mind and onto the canvass, and ultimately how honest the final product is in articulating the ideas that it came out of. So the final truth is that the music Vikerness has written on this one is among the most distinctive ever made in metal.