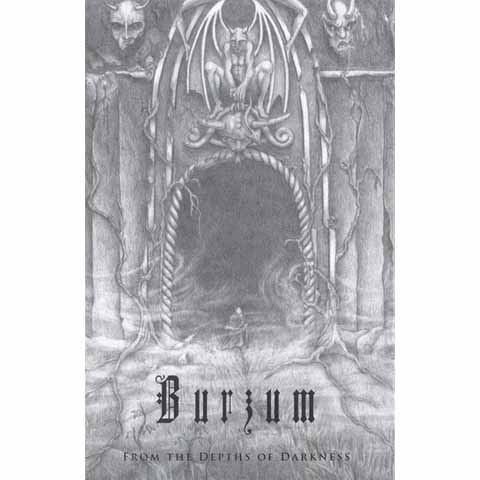 Burzum -From The Depths Of Darkness MC

Vargs favorite tracks from his two first albums Burzum and Det Som Engang Var recorded in 2010 the way he orignally intended. Inspired by the recording of Belus and in the middle of the process of writing Fallen Varg went into the studio in March 2010 and re-recorded a selected number of tracks from the early days of Burzum. The result is a hard hitting and great sounding collection of tracks sounding the way Varg wanted the tracks to sound and to be heard by his dedicated fans and supporters. Its an album that will cement the legacy of Burzum and that is dedicated to Pytten for his gratitude and perseverance in relation to Burzum. Burzum says of the new album: From the Depths of Darkness was recorded and decided to be released because I always meant that the original recordings didn’t do justice to the music, and I wanted to hear the tracks as they were intended by me back in 1991 and 1992, when these tracks were made, and to share this with those interested.

Track listing:
1. The Coming (introduction)
2. Feeble Screams From Forests Unknown
3. Sassu Wunnu (introduction)
4. Ea. Lord Of The Depths
5. Spell Of Destruction
6. A Lost Forgotten Sad Spirit
7. My Journey To The Stars
8. Call Of The Siren (introduction)
9. Key To The Gate
10. Turn The Sign Of The Microcosm (Snu Mikrokosmos Tegn)
11. Channeling The Power Of Minds Into A New God