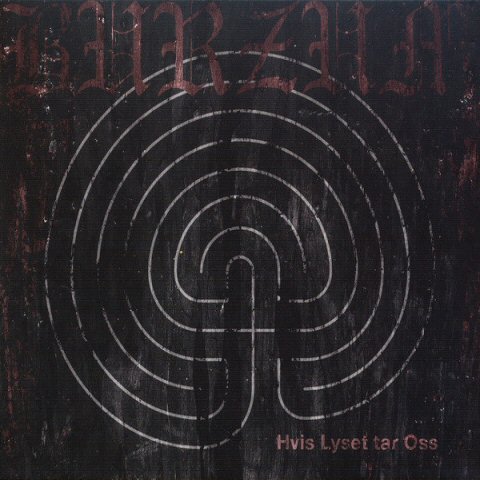 2010 re-release on Varg Vikernes own label with new liner notes written by Varg himself. This album features the original cover artwork inside with a slipcase featuring brand new exclusive artwork outside

Varg Vikernes is without question the most controversial man in heavy metal, but despite being pre-judged by many as being violent and angry, his music in the band Burzum does not deal with the typical conventions of black metal, like Satanism and violence. His music can be thoughtful and metaphorical, and there’s no better example of that than in Hvis Lyset Tar Oss. Consisting of only 4 songs, none of which are under 7 minutes, this album is seen by many as one of the best black metal albums ever made, and Varg Vikernes himself said it was the peak of Burzum’s musical period. The best thing about this album comes in right off the bat: an atmospheric musical soundscape that he has never matched before or since. There was little to no atmosphere in the debut album (although the cold, sharp riffs and general dark feeling made up for that), Det Som Engang Var had some atmosphere, but this album I can just really sink into, and feel the music more than any other Burzum release. Keyboards are much more present in this album, than in the past ones, because they are used in songs outside of the ambient instrumentals. Varg uses them in every song except one to underline the music and carry it along and accompany the pounding exciting drums and speedy tremolo picked guitars. Det Som Engang Var is the first track, and it opens up with the keyboards moving along on their own, making a slow, drawn out melody with quiet guitars following along with it, and this is how the album builds atmosphere, and it does it really well. It almost feels like I’m being brought into the Theodor Kittelsen picture shown on the album artwork. The complete album has a dense atmosphere that doesn’t let up and really reflects what Burzum’s music is like: thoughtful and atmospheric. This is Varg at his best, and if you’re a fan of Burzum or black metal and you can tolerate the vocals, don’t let this release pass you by. It really is astounding.