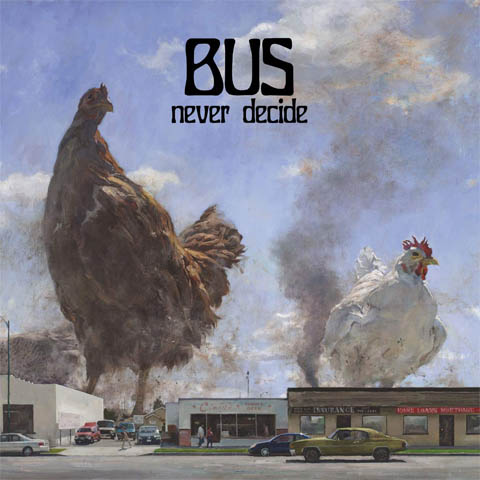 From the opening notes of Never Decide, the second album by Athens, Greece quartet Bus The Unknown Secretary (aka B.U.S.), one knows it’s going to be a wild funhouse ride. It doesn’t sound like just four people, it sounds like a mob of wild-eyed lunatics on the expressway to your skull. And don’t worry about not knowing what the band’s name means. Heavy bands typically don’t know how to make music fun. This isn’t goofy, novelty rock-this is clever, spirited and anthemic rock that doesn’t get bogged down in trying to sound menacing. Never Decide is a multifaceted album in the vein of classic hitters like The Hellacopters, Alice Cooper Band, Judas Priest, Iron Maiden and Orange Goblin. The band formed in Athens in 2011, releasing two EPs and full length The Impious Tapes, followed by The Cross EP (2014), and The Unknown Secretary LP in 2016. Never Decide was recorded in just five days in February 2018 with multi-talented engineer and band’s beloved friend John Vulgaris at Electric Highway Studios in Athens, Greece. The entire band-drummer Aris Fasoulis, bassist Spiros Papadatos, and guitarists Fotis Kolokithas and Politis-recorded the instrumental tracks live in three days, reserving the last two for vocals. Over the two months that followed Vulgaris and the band fine-tuned the mix into a subtle and clever masterwork that goes for the dark edge of heavy, tripped-out rock—though moments of quirky psychedelic strangeness pop up out of nowhere. Ass-kicking bluesy lead riffs and pounding percussion punctuate the hallucinogenic aura. Slow rumbles of sledgehammer melody work their way through a massive kaleidoscopic presence, to finish with a cosmic doom/stoner blast. Never Decide is a sludgy, heavy, doom-stoner wonder that marries above average songwriting and musicianship with an absolutely killer crunch. It’s a metal god worthy of worship. Recommended.