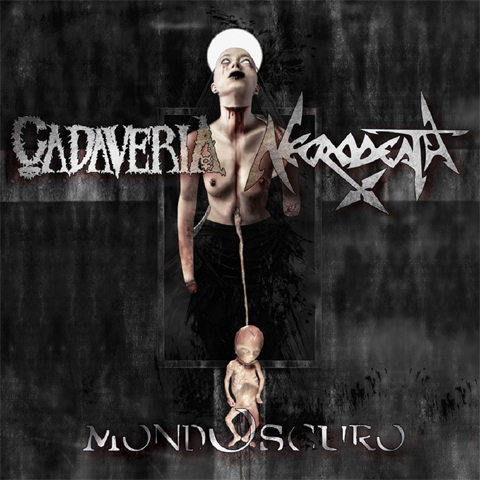 Reduced price due to bent corners

Mondoscuro is a split album between two Italian bands, Necrodeath and Cadveria. The first of them is a rather well known act that plays a distorted type of Thrash Metal, whereas Cadaveria plays some horror tinged black gothic metal that are quite aggressive while still being very melodious in sound. Secondly, the two bands share two band members (the lead singer of Necrodeath is also the drummer in Cadaveria, whereas the bass player is the same person in both bands), which is no doubt why they have decided to shake things up (and this is the part where it gets a bit peculiar): Each band has three tracks on Mondoscuro. One new, as-of-yet unreleased single, a cover track from the opposing band and one more cover. The two bands have, despite the strong difference in sound, managed to mix and arrange the Mondoscuro split so it works well. Cadaveria has also managed to talk Lindsay Schoolcraft from Cradle Of Filth to lend her vocals to one of their tracks. Cadaveria should pelase fans of mid to late Cradle of Filth while Necrodeath is recommened for fans of Slayer, Exodus and Nuclear Assault.