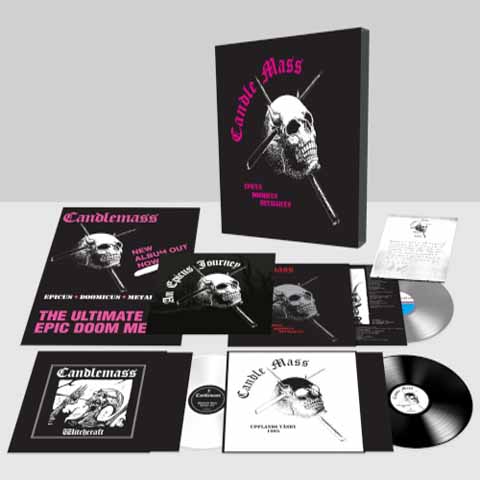 35th anniversary triple lp box set with the original album remastered with the Witchcraft demo and rare Upplands Väsby rehearsals as well as an 8 page booklet, poster and a letter print from founder Leif Edling.

During the mid-80’s, the European heavy metal scene was dominated by countless thrash, death, and black metal bands playing at breakneck speeds and screaming in a high-pitched frenzy. So when Candlemass released their debut, Epicus Doomicus Metallicus in 1986, its songs (featuring slow, lumbering riffs straight out of the Black Sabbath handbook and vocals delivered in a baritone, operatic style) offered up a stylistic curve ball of shocking proportions. After disposing of its deceptively optimistic introductory acoustic guitar, opener “Solitude” develops into a complete monster, replete with lyrics of suicidal depression and churning with the most colossal, down-tuned guitar riff since Sabbath’s “Iron Man.” And that’s just the beginning, as succeeding tracks “Demon’s Gate,” “Crystal Ball,” and “Under the Oak” (later re-recorded in its definitive version for the band’s fourth album Tales of Creation) trudge by with deliberate, immutable doom. Although the group’s vision was startlingly well-conceived and unique for its time, bassist, songwriter and all-around group leader Leif Edling had yet to find all the right components. The band here delivers their strongest, most consistent songwriting of the band’s career, Epicus Doomicus Metallicus is a master piece and vocalist Johan Lanquist is as impressive as the later Candlemass singer Messiah Marcolin. A classic ’80s metal album that will satisfy all doomsters.