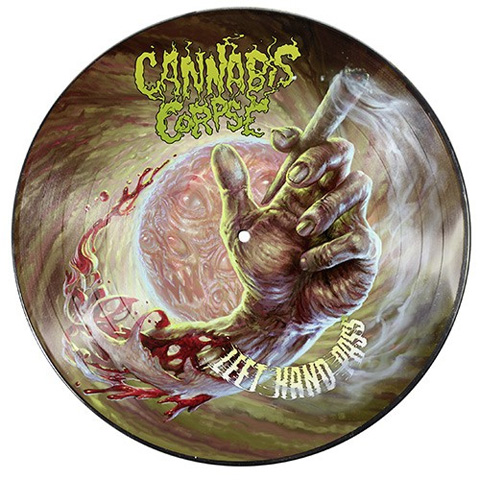 So, if you’re unaware and the moniker wasn’t an asteroid-sized hint, Cannabis Corpse was originally designed to be a Cannibal Corpse-inspired, pot-powered death metal parody act. Featuring Municipal Waste/Iron Reagan’s Phil “LandPhil” Hall and his twin brother Josh “Hallhammer” Hall alongside present-day guitar tandem of Brandon Ellis (Arsis, the Black Dahlia Murder) and six-string prodigy, Ray Suhy (Six Feet Under), Cannabis Corpse originally was a weed-centric riff on death metal’s most popular band with titles and lyrics appropriately altered. “I Cum Bud,” “Reefer Stashed Place,” “Force Fed Shitty Grass” and the title of their debut itself, Blunted At Birth initially meant that this was destined to be a quick and easy belly laugh before moving on. Well, that was over ten years ago and what was presumably supposed to be a one-off has now bloomed beyond all expectations. Cannabis Corpse has expanded their shtick beyond strict Cannibal Corpse salutation, they’ve also incorporated other tangents from the world of death metal. Example: their last two albums were entitled Beneath Grow Lights Thou Shalt Rise and From Wisdom to Baked. On Left Hand Pass, they demonstrate their ability to entwine good and evil (i.e. a good time with evil sounds) in “Effigy Of The Forgetful” which twists an obvious Suffocation reference with Floridian tropes and a wry lyrical stop/start sequence. It shouldn’t come as any surprise that a song with a verbose title that incorporates some reference to weed and ancient Egypt – “Papyrus Containing the Spell to Protect Its Possessor Against Attacks from He who is in the Bong Water” – contains some measure of musical homage to Nile with riffs utilizing a rapid-fire technique and penetrating complexity to brush away the doldrums while also posting a decent helping of catchiness. On the other hand, “The 420th Crusade” and “In Battle There is no Pot” aren’t entirely beholden to Bolt Thrower as they flash shades of reference to both Entombed and Exhumed. “Grass Obliteration” draws on the sort of fantastical story telling death metal has historically excelled at (the song appears to be about a fed-up-with-society stoner who builds a killing machine powered by weed) and mixes it up by pulling in some Cephalic Carnage and Grave. Then there’s the title track, which chugs like Roadrunner and Earache classics to the lyrical tune of “A horrific demon appears/in a burst of flame to do my bidding/I command it to bring me a joint of hells sativa/From a bag made of human flesh it pulls out a doober/I spark it up making sure to pass it with my left hand/The joke was on me/that joint was all stems and seeds.” There are moments within a number of the ten tracks where you can hear the identity of the musicians jockeying for position against the shtick’s requirement that they make casual and ongoing reference to established death metal styles and motifs, if not riffs. “The Fiends that Come to Steal the Weed of the Deceased” has a myriad of recognizable death metal moments interjected into some pretty solid riffing that could have come from the fingers of Erik Rutan, but I swear I’ve heard the melody leading in the main guitar solo elsewhere before, just can’t put my finger on it. This will be a game those of you with extensive record collections of death metal across the obscurity continuum will find yourselves playing over the course of this album. At the same time, to the untrained ear, all of the above is nothing but nerdy hair splitting; your significant other who knows nothing about metal and your mom will continue to hear a bunch of fucking directionless noise. Though, if you spark one up and pass it along and who knows what they might hear.

Track list:
1. The 420th Crusade
2. In Dank Purity
3. Final Exhalation
4. Chronic Breed
5. In Battle There Is No Pot
6. Grass Obliteration
7. Left Hand Pass
8. Effigy Of The Forgetful
9. Papyrus Containing The Spell To Protect Its Possessor Against Attacks From He Who Is In The Bong Water
10. The Friends That Come To Steal The Weed Of The Deceased