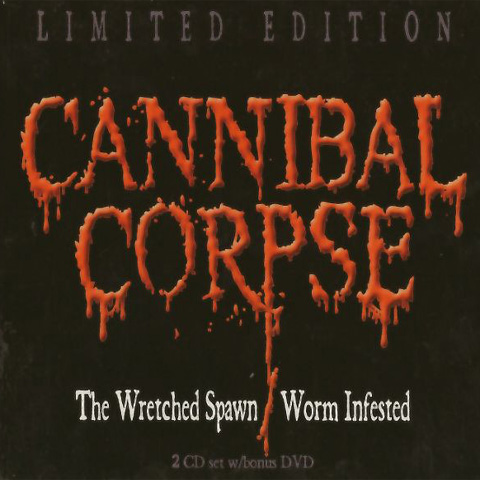 For album number nine, The Wretched Spawn, Cannibal Corpse continue on with much the same style of gore-themed death metal that had made them a mainstay of the stateside scene for a decade-and-a-half. Bassist Alex Webster and guitarist Jack Owen write most of the songs here, respectively, and those songs are pretty much what you’ve come to expect from Cannibal Corpse by this point — musically pulverizing and lyrically unsettling. Vocalist George “Corpsegrinder” Fisher is as unrelenting as usual, especially on such songs as “Frantic Disembowelment,” where he switches from growling to screaming with seeming ease. Wretched Spawn is overall a pretty brief album, clocking in just under 45 minutes, as few of the 13 songs break the four-minute mark. The title track is an exception, as are the lumbering “Festering in the Crypt” and the thrashing album-closer, “They Deserve to Die” — these three longer songs being some of the more interesting ones here, given their unique characteristics. Most of the others are rather straight-ahead death metal blasts, and while they’re on the mark stylistically, they may seem a bit workmanlike to longtime fans who have heard all this before. And that’s perhaps the one lurking problem with Wretched Spawn — it sounds great and is everything you’d expect it to be, but it’s nothing new for this veteran band, who long ago perfected their death metal attack. If you’re perfectly fine with the status quo, or are perhaps new to Cannibal Corpse, you’ll surely find much delight here; however, if you’re looking for something beyond another run-of-the-mill album from the band, you’ll probably want to pass this one over. Unlike more memorable albums such as Tomb of the Mutilated (1992) and Bleeding (1994) where the band took its music to another level, Wretched Spawn is simply Cannibal Corpse continuing on with their trademark mayhem, seemingly confined by or content with their own musical boundaries, for better or worse.

Worm Infested
If you’re going to record and offer an EP or single release to fans to pad your sales between full length albums, the least you can do is offer material that they don’t already own in one form or the other. And with Worm Infested, the first Cannibal Corpse EP since the now useless Hammer Smashed Face 10 years prior, they have done exactly this. At over 22 minutes of music, Worm Infested offers two new studio tracks, three decent cover tunes, and a re-recording of “The Undead Will Feast” from the debut Eaten Back to Life, with Corpsegrinder’s vocals in place of Barnes. ‘Systematic Elimination’ is the only track here to be redundant with the 15-Year Killing Spree boxed set to release later in the same year, but it’s a competent bludgeon that capitalizes on the high velocity catapulting rhythms inherent on the last full-length album Gore Obsessed. Of special note are the brutal rhythm guitars beneath the wildly flailing leads. “Worm Infested” itself is not quite as good, but there’s a lengthy scale pattern that weaves through the track, giving it a feel of Middle Eastern mystique ala Nile. Next is a cover of “Demon’s Night” ala Accept, from the Restless and Wild album, and as usual, they do a good job transforming into something of their own which wouldn’t sound completely out of place in a set list among their more brutal originals. “The Undead Will Feast” isn’t a far cry greater than the original version with Barnes vocals, but I do prefer Fisher in the end and the mix feels more brutal and up to date with the 21st century Cannibal repertoire. “Confessions” is the band’s second Possessed cover, having done “The Exorcist” a decade past on their Hammer Smashed Face EP. It seems Fisher attempts to make the vocals too close to Becera’s original, I might have preferred his grunting tone here, but otherwise it sounds exciting and solid. The last track on the EP is a cover of Metallica’s “No Remorse”, which rocks as hard as it ought, and like the Accept tune, they again make it their own. Worm Infested was a decent tide-over until The Wretched Spawn. As for the originals, “Systematic Elimination” is quite good and very similar to the material for the next album. The Accept and Metallica covers are also worth hearing, but the overall value of this release is simply not in league with the previous albums like Bloodthirst or Gore Obsessed.

Dvd track list:
1. The Making Of The Wretched Spawn