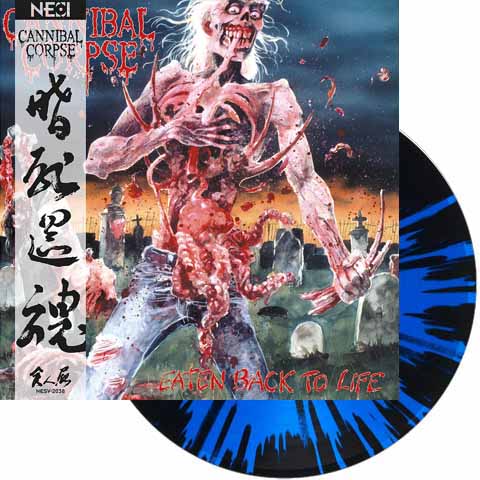 2021 China version on black and blue splatter vinyl with glow in the dark sleeve, OBI-strip and poster. Limited 180 copies

Cannibal Corpse emerged fully formed out of Florida’s famous death metal swamp with this one. All the trademarks are in place, from the B-horror movie album cover art to the ludicrously over the top lyrics — “Brains devoured in a frenzied slaughter, thirst for gore nothing more/Bile is dripping, puss from wounds, as the coroner drinks it down.” Chris Barnes growls his vocals like Satan on a diet of razor blades and paint thinner. ‘Eaten Back To Life’ has its share of good to great tracks: opener ‘Shredded Humans’ gets the album off to a tense and very death metal start, and other tracks such as ‘Born In A Casket’ or ‘Bloody Chunks’ certainly represent some of the more brutal future of the band. But then songs like ‘Mangled’ or ‘Buried In The Backyard’ are tepid and overly thrashy numbers which tend not to go anywhere with their riffsets except in circles. Granted, Cannibal Corpse is one of the first death metal bands, and as such was rather held to the verse-chorus song structure we’ve all grown to hate, but the tracks here slavishly hold to a handful of riff styles and tempos, so the band never gets a chance to really flex its creative wings. The riffs are certainly the best part of the album and indicate a much brighter future for the band; Cannibal Corpse was probably the first (and still one of the only first-tier DM groups out there) to almost completely eschew melodic passages for an endless series of tense and gory tremolo riffs, and most of them are very good and indicate a band capable of something greater. Deicides vocalist Glen Benton guests on background vocals.