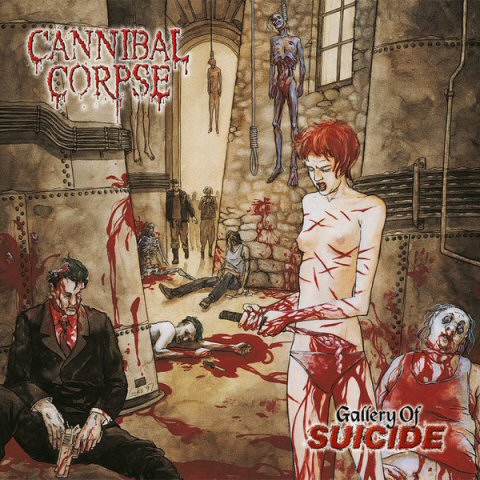 2018 reissue on black vinyl with lyric insert and poster

Cannibal Corpse settled into their own gruesome groove early on in their career, spitting out a predictable set of carnage-obsessed trash-rockers on each of their albums. Consequently, their albums can be a little interchangeable, and Gallery of Suicide — the group’s sixth album — is no different. From the titles (“Disposal of the Body,” “Blood Drenched Execution,” “Dismembered and Molested,” “Stabbed in the Throat,” “Centuries of Torment,” “Crushing the Despised,” “I Will Kill You”) to the incessant, buzzing guitars, it’s Cannibal Corpse as the fans have come to expect them. It’s a little fresher than its predecessor, Vile, but it does have the problem of sounding a little monotonous in comparison to their entire catalog. That may not matter to the hardcore fans, who will inevitably be able to spot subtle differences between this and their previous albums, but it does suggest that the band will need to find a new modus operandi soon in order to keep things fresh.

Track listing:
1. I Will Kill You
2. Disposal Of The Body
3. Sentenced To Burn
4. Blood Drenched Execution
5. Gallery Of Suicide
6. Dismembered And Molested
7. From Skin To Liquid
8. Unite The Dead
9. Stabbed In The Throat
10. Chambers Of Blood
11. Headless
12. Every Bone Broken
13. Centuries Of Torment
14. Crushing The Despised