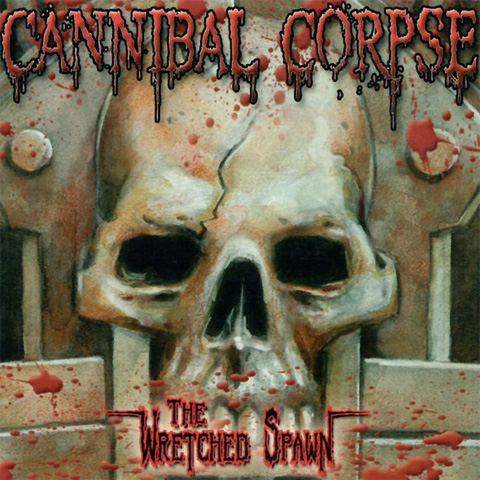 For album number nine, Wretched Spawn, Cannibal Corpse continue on with much the same style of gore-themed death metal that had made them a mainstay of the stateside scene for a decade-and-a-half. Bassist Alex Webster and guitarist Jack Owen write most of the songs here, respectively, and those songs are pretty much what you’ve come to expect from Cannibal Corpse by this point — musically pulverizing and lyrically unsettling. Vocalist George “Corpsegrinder” Fisher is as unrelenting as usual, especially on such songs as “Frantic Disembowelment,” where he switches from growling to screaming with seeming ease. Wretched Spawn is overall a pretty brief album, clocking in just under 45 minutes, as few of the 13 songs break the four-minute mark. The title track is an exception, as are the lumbering “Festering in the Crypt” and the thrashing album-closer, “They Deserve to Die” — these three longer songs being some of the more interesting ones here, given their unique characteristics. Most of the others are rather straight-ahead death metal blasts, and while they’re on the mark stylistically, they may seem a bit workmanlike to longtime fans who have heard all this before. And that’s perhaps the one lurking problem with Wretched Spawn — it sounds great and is everything you’d expect it to be, but it’s nothing new for this veteran band, who long ago perfected their death metal attack. If you’re perfectly fine with the status quo, or are perhaps new to Cannibal Corpse, you’ll surely find much delight here; however, if you’re looking for something beyond another run-of-the-mill album from the band, you’ll probably want to pass this one over. Unlike more memorable albums such as Tomb of the Mutilated (1992) and Bleeding (1994) where the band took its music to another level, Wretched Spawn is simply Cannibal Corpse continuing on with their trademark mayhem, seemingly confined by or content with their own musical boundaries, for better or worse.