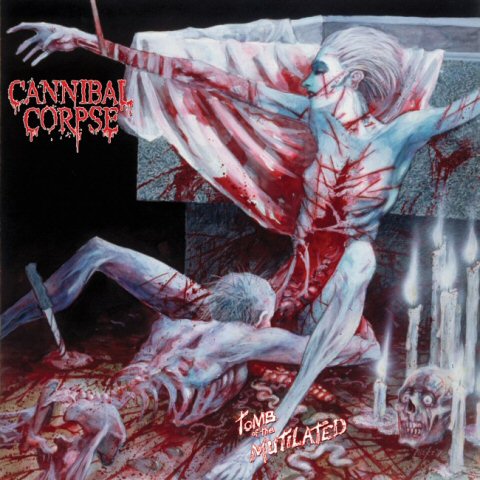 2016 re-issue on black vinyl with photo insert and poster

Released in 1992, Tomb of the Mutilated helped establish Cannibal Corpse’s reputation as one of metal’s goriest, most vile outfits. Boasting some of the sickest album art and song titles of all time, the band’s attention-getting tactics worked perfectly and record sales soared. Cannibal Corpse then became one of the biggest names in the death metal genre just as the group’s discs and live performances were being banned all over the world. Listeners unfamiliar with the belching vocal style and pummeling drum and guitar attack typical of death metal probably won’t understand what separates this or any other record that adheres so stringently to the genre’s formula, but learned fans have come to appreciate Tomb of the Mutilated as a solid, if not important, offering. Vocalist Chris Barnes’ constant barrage of Cookie Monster-esque lowdown grunting is pretty much unintelligible throughout, leaving his gross-out lyrics offensive only to those who read them. However, the effect works nicely and maintains tradition. Standout tracks include “Beyond the Cemetery” which boasts the record’s best riffs and speedier cuts like “Split Wide Open” and “The Cryptic Stench.” Generally not taken seriously in many metal quarters due to their fascination with cartoonish gore, Cannibal Corpse somehow managed to outlast many of their more critically accepted contemporaries due in no small part to early career efforts like Tomb of the Mutilated, with its powerful musical focus.