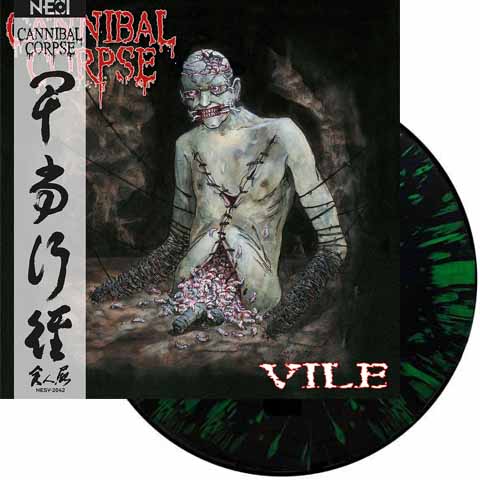 China version on black and green splatter vinyl with OBI-strip, glow in the dark sleeve and poster. Limited 180 copies

Released on Metal Blade in 1996, Vile is the first Cannibal Corpse recording to feature vocalist George “Corpsegrinder” Fisher. The band had built up a considerable following within the death metal community, and that success continued as Fisher brought a vocal dynamism and character that livened up the band’s six-year-old sound. Fisher’s ability to match the musical intensity and rhythm of Vile’s more complicated assemblages of riffs created a more sophisticated yet equally tortuous essence. Both the album art and song titles — while gruesome to the extreme — were somewhat toned down when compared to earlier Cannibal Corpse efforts. The band members might have been put off by so many accusations of novelty, and intent on proving their worth as musicians. Vile demonstrates a commitment to musical growth: Tracks like “Devoured by Vermin” and “Bloodlands” feature more complex, focused, and just plain interesting musical ideas as well as precise execution. Fans of death metal who haven’t yet discovered Cannibal Corpse would be wise to give Vile an open-minded listen, in order to understand how this group has managed to pull off thousands of successful shows and maintain such a rabid following.