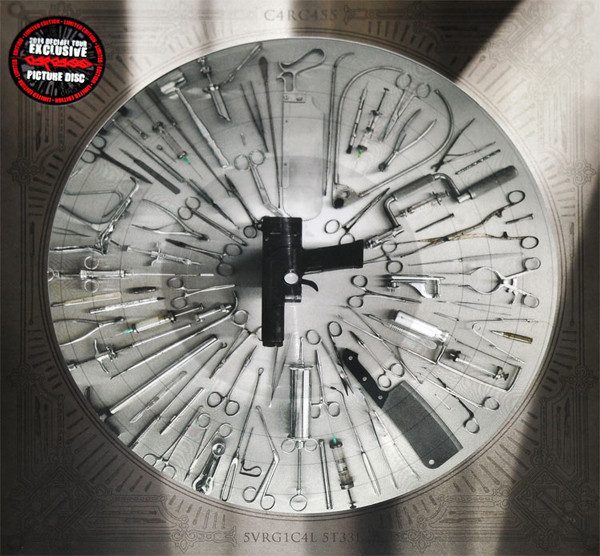 American picture disc in die-cut cover made for the American Decibel Magazine Tour 2014.

Few bands ever took the term “death metal” as literally as Liverpool, England’s Carcass. The band’s penchant for crafting song titles that eschewed Satanic tropes in favor of gruesome medical terminology became as much a calling card as their neck-snapping blend of melodic thrash and punishing grindcore, and when they decided to call it quits in 1996 after the release of the relatively disjointed (by Carcass standards) Swansong, it left a fouler taste than usual in the mouths of their listeners. Seventeen years later, Surgical Steel, the group’s sixth long-player, remedies all that with a decisive thrust of the scalpel, offering up an 11-track tour de force that’s as visceral, inventive, and grotesque as Symphonies of Sickness, yet infused with the dense, machine-shop precision and chrome veneer of 21st century metalcore. What impresses most upon hearing the latest from guitarist Bill Steer and bassist/vocalist Jeff Walker, who are joined by new guitar player Ben Ash and new drummer Dan Wilding, as well as longtime producer Colin Richardson, is how confident it sounds. This is not some rote, paint-by-numbers nostalgia trip, nor is it a calculated audio autopsy of what made landmark grindcore albums like Reek of Putrefaction and Necroticism: Descanting the Insalubrious so influential. The dense, instrumental opener uses a demo from 1985 as a foundation for Steer and Ash to lay down some “Hellion”-era Judas Priest-inspired leads, and subsequent tracks like “The Master Butcher’s Apron,” “Cadaver Pouch Conveyor System,” and “Unfit for Human Consumption” immerse themselves effortlessly and irrevocably within the Carcass canon, yet manage to convey a level of nuclear propulsion that suggests a band just entering its heyday as opposed to unexpectedly emerging from the abyss. That Carcass chose to come out of their cave at all is impressive, but that they did it with both style and substance intact is great news for fans of extreme metal the world over.