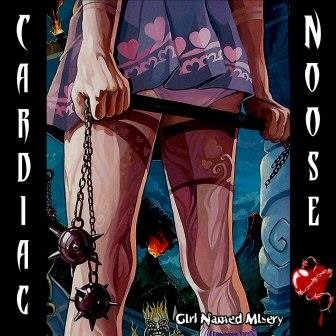 Cardiac Noose was born out of the ashes of the New York Doom act Lost Breed. A band that had Wino from Saint Vitus on the vocals until the signed to the defunct Hellhound records in the 90s. Two of the members in Cardiac Noose, Eric Baestlein and John Rapp, has not only played with Lost Breed but also the New York 80s heavy/speed metal band Blind Legion. When Lost Breed disbanded in the late 90s (with an unreleased album under their belt), they called themselves Vengeance Brothers for a short time before changing name to Cardiac Noose. Two private pressed self released albums was released, Bled To The Bone 2007 and Get Back Home in 2009, before it got rather quite around the band. Then in 2013 the band returned with their third released Girl Named Misery. This album is a step forward in song writing and its an album that not only should please the old Lost Breed and Blind Legion fans but any fan who wants their rock honest and really heavy. Girl Named Misery features twelve great songs of whiskey-drenched Southern Metal with the classic Hard Rock academy of the 70s in the back. Think Lynyrd Skynyrd and UFO through an Alabama Thunderpussy filter and you might get the picture