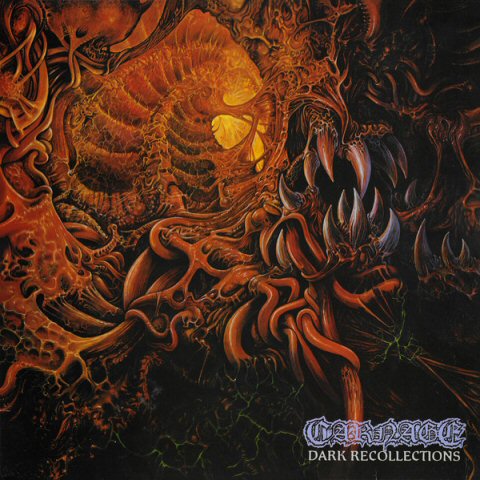 Essential Swedish death metal band that released one album in their lifespan: Dark Recollections. To say that this album (which in its own right is historic) holds a lot of history and influence in the Swedish death metal scene is an understatement. Carnage, was most notably known for being comprised of members that would eventually go on to form the band, Dismember. However, Carnage would also showcase Micahel Amott, who would go on to join Carcass and Johan Liiva, who with Amott, would form Arch Enemy (and Spiritual Beggars). Some members also had their hands involved with the band, Entombed during its earliest stages. Quite a lot of name dropping, no? Now, if you think that just because Carnage’s members are mostly consisting of future Dismember members that “Dark Recollections” would sound similar to a Dismember album, well, you’d be right. “Dark Recollections” is chock full of the down-tuned, buzz saw riffs that create the trademark distorted sound that Dismember have played during their career. In addition, the groovy and bluesy sound of Entombed come through on many of the rhythms throughout the albums, which given the connection of the country of origin and former band ties, comes as no surprise. There are a number of melodic hooks at beginning of most songs that capture the listener and then transform into heavy, gloomy riffs that carry both the Swedish death metal sound as well as a steady pulsating beat that drive the songs forward. Melodies not dissimilar to Entombed’s bluesy, death are heard, picking away over top the ripping leads while solos pop up from time to time. Some are short and sweet, while others are merely guitar fills that add a quick burst of flair to a song. Matti Kärki’s vocals, as you might image, bring about sounds of Dismember, but there are something about the sound of his voice that differs between the two bands. The similarities are many, but on “Dark Recollections” Karki seems to have a darker and grittier sound than they would on “Like an Ever Flowing Stream”. Either way, the vocals inspire a sort of madness that reflect the mood of the album and bring the imagery of the cover art to life. Listening back to this music now, some of the composition sounds quite naïve and sure it’s a crude recording, but Death metal was never meant to be pretty, baby!. One way or the other, Carnage may have only survived for one album, but it is a solid slab of Swedish death metal whose sound would spill outward onto the Swedish scene. I’ve always felt “Dark Recollections” has an important place in the history book of heavy metal and is an album I always recommend to those getting into the melodic/Swedish side of death metal.