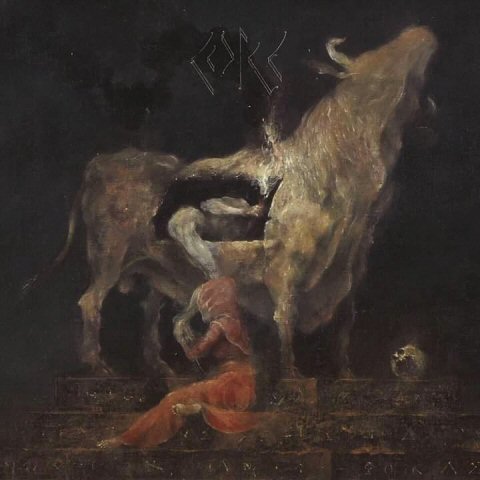 2014, the year that saw this Californian power trio unleash Under Siege, their second album, their third release overall, featuring Denis Forkas Kostromitin’s magnificent dark art on its cover, which was the factor that made me check out the amazing heavy/doom hybrid Blacklands in the first place. A great choice indeed, and the figure emerging (or is it entering?) from the bull is both puzzling and elegant. But how do the musical contents of this beast fare? Well, if you enjoyed the band’s back catalogue you shouldn’t fear disappointment. Though it certainly didn’t ensnare me at first listen like its predecessor, Under Siege is practically a continuation of the same aesthetics. All eight compositions are under five minutes in length, concise and sober heavy/doom ripe with quality powerful riffage and the mesmerizing chants of Liz Blackwell. That’s what I hoped for, and that’s what we got, hellyes! Now, unlike their sophomore, I do feel this newest record is a bit lopsided, with most of the outstanding moments stacked in the second half. Nonetheless, Distant Attack is an excellent opener, propulsive and sensual. I love the background choral arrangements with Liz voice, as she sings on top of those. Yeah, these guys don’t need another voice, that’s for sure. I do find improvement in the limited vocal participations by the band’s axe-master, Mr. Mat Davies. I was not a fan of his grunts on past albums, yet here he chose a less gruff voice, and the result is pretty good, most notably on the excellent album closer Evil Ways. His spot-on riffing is still excellent, even though the song structures on this record are somewhat simpler than the more slithery tunes on Blacklands. If you’re looking for good vintage heavy/doom this 2014, look no further and grab this. My only quibble is that at under 34 minutes in length, Under Siege is a bit short, leaving you aching for more Castle metal… and that’s not a bad thing, after all. May the Castle stand strong for many more years!