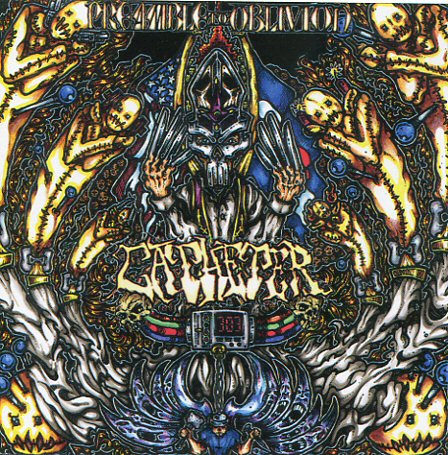 Catheters idea of grind has not really been updated since the genre’s inception. The band plays pure, old school, crusty grindcore, clearly devoted to the standard set by albums like Scum and Horrified, leaving little room for experimentation or musical flights of fancy. The number of Cripple Bastards records owned between the members of this band must be completely unreasonable. Positioned somewhat alongside bands like Phobia or Pretty Little Flower (though perhaps a little less straightforward and minimal in their delivery), Catheter is one of numerous bands out there that heard the first grindcore material ever made, liked it, and stubbornly chose to stick with that. Of course, when it comes to grind, that’s usually a pretty good idea. Apart from the intro track and a few moments scattered throughout the record, Preamble To Oblivion is dominated by blazing blast sections, frantic, explosive crust punk riffs, and a throat-ripping vocal performance courtesy of… all the members in the band, all the time. Though there’s a chance you might here some of the oppressive, doomy material old school grind bands tend to sprinkle throughout their records, for the most part you’re just going to be battered in the late 80s grindcore style without much in the way of avant-garde weirdness. Cutting their style heavily from early Napalm Death, Siege, Extreme Noise Terror, and a host of other early grind and power violence bands, Catheter’s music isn’t really trying to do much more than uphold the established tenants of the genre. Fortunately, they know how to write grind and write it well. Catheter’s songs are short, punchy, and packed with atonal, gnawing tremolo riffs over a rich, frantic percussion bed, packed to the brim with blast beats and melodies that might be found on an album like Inhale/Exhale. That being said, this is punkier than just about anything in Nasums catalog- the crust influence on this record is potent and obvious in the riffing and d-beat oriented drumming. Catheter has to me always seemed to be a band more aligned with the crust punk side of grind more than the metal one, and though there are certainly some metallic influences at work, particularly during the slower, more measured sections, the band still has an overwhelmingly punky delivery, much closer to Agathocles than any modern Willowtip material. There’s a staunch dedication to the old school ethos of grind: short, simple songs that impact the listener and don’t dawdle around with any more ideas than are absolutely necessary. Yeah, at fifty minutes (including the bonus tracks), this does tend to wear on you a bit by the end. Catheter is unapologetically one-dimensional in their execution of the style at hand- but the compositional quality and pure energy on display makes it bearable if a bit bloated. This should really be sold alongside a random Phobia album for the complete effect. Catheter is playing grind exactly as it was in the late 80s and early 90s for fans of the style only. It’s a solid record, though rather bare-bones and straightforward, and I can easily recommend it to most of the straightforward, old school grind fans out there. Those who are looking for something more involved and original, though, would be encouraged to look elsewhere.