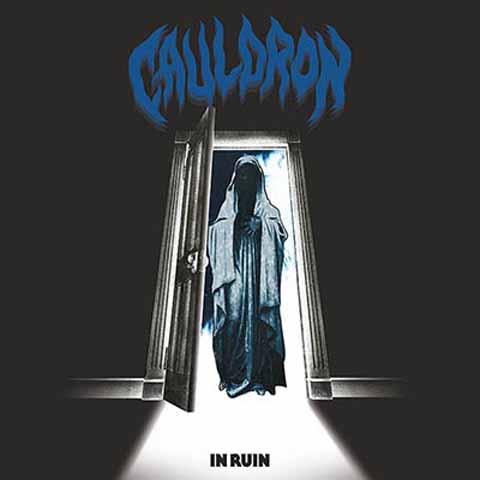 Canadian heavy metal band Cauldron formed in Toronto, Ontario, back in 2006. Since then they have released several albums and toured the world and played with many big names. For their fourth studio album In Ruin the trio returned to the Lincoln County Social Club recording studio in their home town of Toronto, where they recorded two of their previous albums, namely Burning Fortune (2011) and Tomorrow’s Lost (2012). Co-produced by Chris Stringer (Rush, Timber Timbre), In Ruin is sure to deliver more riffs, more attitude and more traditional metal to the band’s growing army of fans.
Front man Jason Decay can’t hide his enthusiasm about the album featuring songs such as Burning At Both Ends (being about going too hard for too long and facing the repercussions of what that entails) and Santa Mira (about the movie Halloween III): “In Ruin is probably the next logical step, a subtle and natural progression from Tomorrow’s Lost. We were very satisfied with Tomorrow’s Lost so we had to make sure we had a worthy follow up and I think we’ve exceeded that. I suppose you could say its a little more melodic and refined, yet diverse. I think the early L.A. Metal Blade/Metal Massacre scene is just as prevalent in our sound, if not more than the NWOBHM. Sure the European flavour is there, especially from the German and British bands but I don’t think any more so than the Canadian and US power bands. Actually, now that I think of it, I think Ian’s writing style is a little more European and I’m a littler more American – I’ll let you decide!