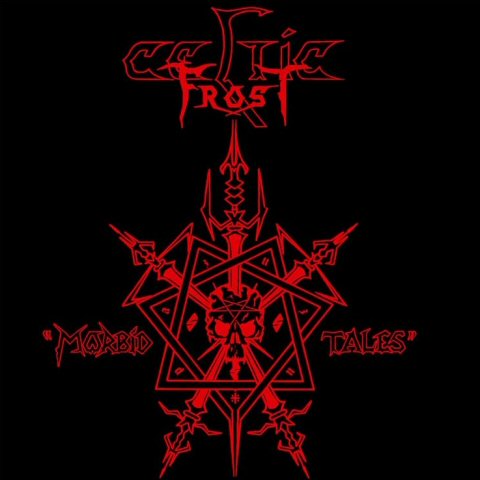 Though they’d been together for barely a year and had yet to play their first concert, Celtic Frost brought a remarkably accomplished vision to the recording of their first album, 1984’s Morbid Tales. With its highly focused thrash metal intensity and peculiar mix of satanic and esoteric lyrics, the album would sow the seeds of Frost’s overwhelming influence in years to come. And, along with the powerful visual impact of its bandmembers’ leather-bound wardrobe and badly-drawn facial corpse paint, songs like “Visions of Mortality” and “Morbid Tales” would be analyzed, digested, and regurgitated by manic hordes of disillusioned European youths forming their own death metal bands in years to come. Following the hellish primal screams of intro “Human,” and the lethal speed metal of “Into the Crypts of Rays,” Tom Warrior (aka Thomas Gabriel Warrior) and company lock into a fierce groove which rarely falters through to the last riff of closer “Nocturnal Fear.” With its primitive grind, the excellent “Procreation (Of the Wicked)” (later covered by Sepultura) remains a career highlight, but shows no sign of the band’s future experiments in avant-garde metal. In fact, these are only hinted at by the female voice recital utilized in “Return to the Eve,” and the bizarre noise experiments of “Danse Macabre” — a collage of sound effects, violin, Warrior’s moans, and all-around mayhem. As for Celtic Frost’s own source of inspiration, Venom and other New Wave of British Heavy Metal bands provide the bulk of it. The main riff of “Dethroned Emperor,” for instance, simply offers a slight variation of Diamond Head’s “Am I Evil.” But it was Celtic Frost’s very isolation from rock’s typical breeding grounds which fed their uniquely European perspective. Had they not been impoverished outcasts within Switzerland’s protective prosperity in their formative years, it is unlikely that theirs could have been such a twisted and wonderful evolution.