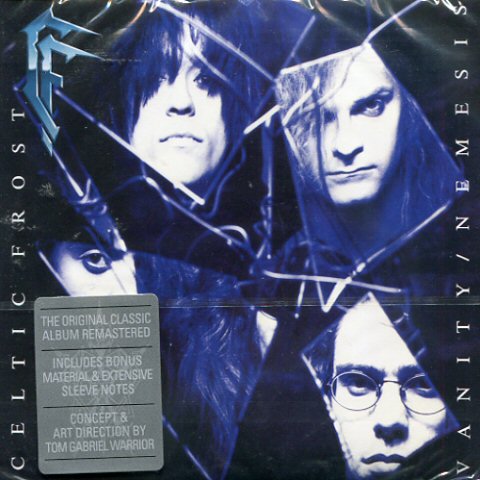 Few bands in the metal world get a second chance after a major career misstep, and no band exemplifies this problem more than Celtic Frost. Two albums ago (Into the Pandemonium), they were pioneering avant-garde sensibilities in the thrash genre and wooing audiences and critics with their vast abilities. Then everyone but leader Tom Warrior quit the band, and the next album (Cold Lake) ushered in a new sound and a glam image that turned fans and critics away in droves. So after getting back original bassist Martin Ain, Warrior blended the two line-ups and decided to get back to his roots on Vanity/Nemesis. Crafting a grinding chug that emphasized their mastery of thrash metal, the album was an ugly beast that offered a unique sound that no bands have really tried to adopt since. Whispered passages and wildly experimental guitar solos are two of the elements that carry from song to song, while the thick riffs of their pre-Cold Lake sound manage to survive the transition quite easily. This all adds up to a mean little album that spits out vicious songs that have such a strange and arty bent to them that it borders on parody at times. That isn’t to say that the songs aren’t still juggernauts, but the lyrics to tracks like “Phallic Tantrum” are so vague and heady that they don’t even achieve the goal of making the listener think. One track in particular stands out for being a major artistic success here: “Wings Of Solitude.” Assisted by the delicate wail of Michele Amar on the verses, the band delivers a song that mixes the strange sensuality of goth rock with Warrior’s classically inspired metal to create a track that is at times sexy, brutally heavily, and oddly soulful. A mournful cover of Bryan Ferry’s “This Island Earth” is a surprising success, while a version of David Bowie’s “Heroes” is a miscalculated failure that so drastically changes the original that it is a wonder they ever bothered. The latter song aside, this is a slightly flawed but otherwise satisfying album, offering a direction for heavy metal that no other band tried to follow up on at the time. Sadly, their reputation as sellouts carried over into this record, and without directly repeating their black metal heyday, many critics also unfairly panned it. Years later, this stands as a sad document of a band trying to pull themselves together after a problematic period and succeeding artistically while unintentionally ending their career in the process.

Track list:
1. The Heart Beneath
2. Wine In My Hand (Third From The Sun)
3. Wings Of Solitude
4. The Name Of My Bride
5. This Island Earth-Bryan Ferry cover
6. The Restless Seas
7. Phallic Tantrum
8. A Kiss Or A Whisper
9. Vanity
10. Nemesis
11. Heroes-David Bowie cover
12. A Descent To Babylon (Babylon Asleep)