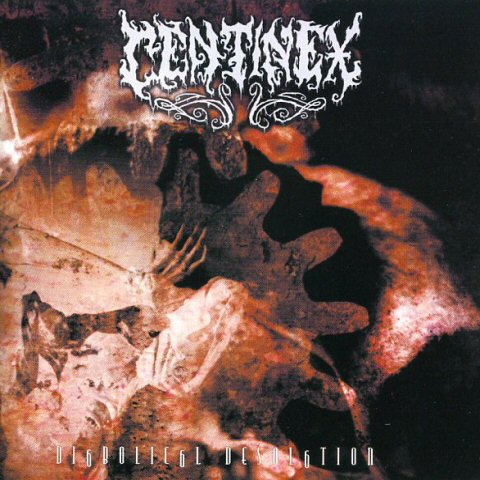 The year 2002 saw the return of Centinex with a new full-length effort, Diabolical Desolation. With the previous Hellbrigade, our Swedish butchers returned to a more solid and natural death metal approach, forgetting a bit the black metal touches of the past albums. This album can be considered as a natural continuation of the previous album because the death metal continues to be the strongest point here and also the production now exalts the classical death metal style of the band. “Demonic Warlust” can be easily considered one of the best tracks here because the level of inspiration is excellent and the tempo is immediately fast. After awhile, we remain surprised for the more melodic sections we can find: the keyboards create a base under the less impulsive guitars and this has its climax on the solo. The rest is definitely faster and the vocals are in constant balance between the screams and the classic growl that, however, is never excessively screamed. “Forthcoming Terror” is straightforward death metal with fast palm muting parts and sudden blast beats. The atmosphere is pitch black and “Spawned to Destroy” adds more violence with heavy riffs and impulsive paces. The Massive Killing Capacity influences reign supreme over “Total Misanthropia” song for the tremolo on the guitars and the up tempo. “The Bloodline” sounds more “classic death metal” for the use of some ultra low pitched vocals and the ultra heavy riffs. The speed is important here but the mid-paced break by the middle is something nasty and catchy at the same time. After all this brutality, the melodic lead notes of “A War Symphony” are more than welcome, even if the structure soon returns to death metal but it’s a death metal that never forgets the melodic hint. The final “Hellfire Twilight” is again incredibly influenced by the mid-era Dismember and the groove is also more present to give the right heaviness to these good riffs. Quite simple, Diabolical Desolation is another good release by this overlooked band.