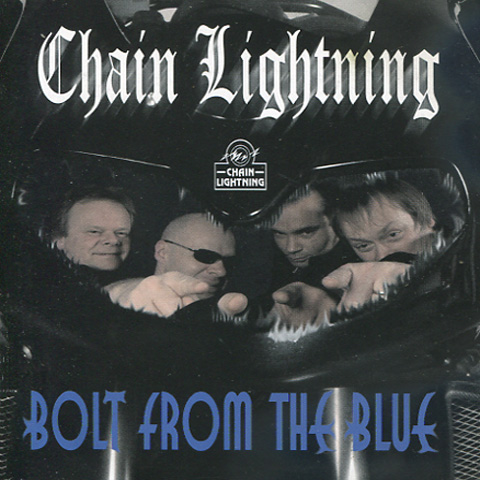 Chain Lightning were a UK heavy metal band, based in Cornwall, formed in 1989 when ex Desperate Oates guitarist Jake Lin Tremayne Williams (alias John Singing Rock) got together with drummer Terry Morgan, Bass player Keith Seymour and Vocalist Terry Newman. The band went through many changes during its 4 years of existence, the only original member staying being Lin Tremayne. The most successful line up and one of the last featured Lin Tremayne on guitar, Derek Hodd (Ex Chain Reaction, Cloven Hoof and Panik Attack) on vocals, Steff Pitcher (ex Grinder) on bass and Tim Evans (ex Panik Attack) on drums. The bands releases include 2 tracks on the Livehouse Rock compilation album, a live tape called ‘Up And Rising’ and a 5 track mini cassette album called ‘Unchained’. Three tracks from the ‘Unchained’ tape are released on this cd together with 7 old tracks that all have been re-recorded in Cornwall in January 2007.