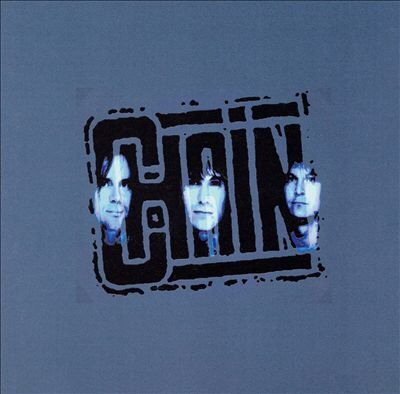 Chain was an early project featuring Scottish singer Doogie White. White started back in Motherwell were he formed La Paz who released two cassettes and gigged around Scotland. He then sang on an album with Midnight Blue before singing with Praying Mantis on their 1991 Japan tour. Around the same time the had this band, Chain, who laid down a studio session at Big Chiz Studios in Chiswick, London. Doogie White sent a demo tape to Ritchie Blackmores management which got piled away for a few years before Candice Night discovered it and liked what she heard. She presented it to Blackmore who after an audition joined Rainbow in 1994. It was Doogie White became the singer of Rainbow that especially the Japaneese fans and labels started to hunt down everything White had done in the past and this unreleased Chain studio session was bought up by Victor records in Japan who released it on cd in 1996 and then it was re-released as a private pressing in Europe in 1997 (around the time that his session with Rainbow was over). However it wasnt until the Edgy label started to distribute this title in April of 2003 that it was possible to find it. The Chain album, titled Eros Of Love And Destruction, features the line up of Jem Davis on keyboards, Ashley Limer on guitars and Doogie White on vocals. This is a straight forward Uk hardrock album. Sometimes its groovy and heavy and sometimes its keyboard friendly melodic rock. This session doesnt sound like it has received the best production before it was released but the performance is really good. Unfortunately none of the tracks on the album stands out and not even Doogie Whites strong voice are able to lift this album up to more than average. So my guess is that its an album that would fit Doogie White fans only