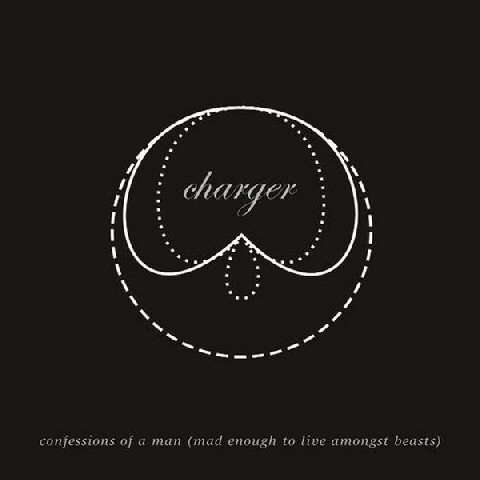 UK beasties Charger are chiselled from the same mountain as American acts Soilent Green, Eyehategod, Khanate, and a large chunk of the early Southern Lord catalogue — in other words, all sludge, all the time; offering the blend of hardcore, metal, doom and despair, that’s the musical equivalent of being dragged behind a truck by your fingernails. Charger’s debut, Confessions Of a Man Mad Enough To Live Amongst Beasts alternates between mid-tempo riff-plods and mesmerizing, one-chord drones, with punctuation provided by scorching blasts of feedback and the pained, wailing vocal tantrums of Tim Machine. Capturing Charger’s thoroughly ugly musical upheaval was underground-hero/engineer Billy Anderson (Neurosis, Buzzov-En, Brutal Truth, High on Fire, etc.) whose stamp of approval lends some credibility to what might be a more typically derivative effort. And indeed, his full, enveloping, production eats up all frequencies, making long mud-trudges “Airtank Face Pincers” and “Chide And Harmonize,” joyfully unbearable for fans of such noisy, teethgrinding anti-music. The arrangements are typically disorienting, songs usually starting on the path of a solid punk riff before veering into the ditch and getting lost in a nearly structure-free, mine-strewn battlefield of spoken word interludes, distorted howls, and moments of Neurosis-style scorched-earth tension-and-release. Sure, most doom-core-whatever purveyors have felt this type of exquisite pain before, Confessions Of A Man. . . doing little to push the boundaries of the genre — but who can dislike an outfit with the yarbles to title a song “God Made Us In The Image Of His Ass,” and to so convincingly prove its truth?

Track list:
1. Ultra Violet Flyer
2. God Made Us In The Image Of His Ass
3. Pennies For Soil
4. Chide And Harmonize
5. Carbon Wings
6. Airtank Face Pincers
7. –
8. A Ventilation System For Cooling Poultry