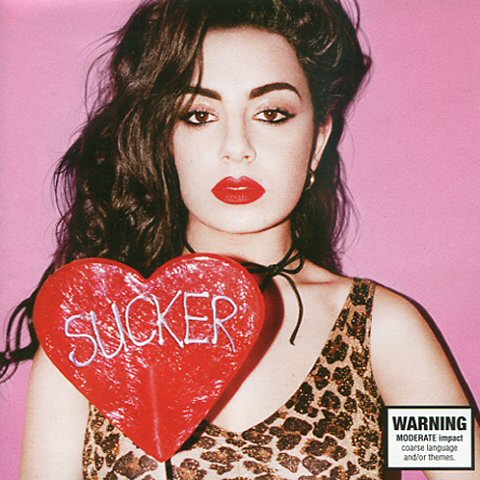 Australian 2015 pressing with one bonus track

For a while, Charli XCX seemed to be tiptoeing into the spotlight. After co-writing and singing on Icona Pop’s smash hit “I Love It,” her album True Romance — which had a darker, indie-friendly sound — earned more acclaim than sales. Her next big break came with another collaboration, 2014’s inescapable “Fancy,” where she provided the sing-songy chorus to Iggy Azalea’s brash verses. On Sucker, she keeps more of that hit-making swagger for herself, delivering attention-getting pop that’s bold enough to ensure she isn’t overshadowed by anybody. She makes her purpose clear with the album’s title track, a musical middle finger to the clueless set to revved-up synths and stabbing guitars. It’s a big change from the gothy pop of True Romance, though even on that album, XCX’s hooks were undeniable. Sucker is also full of should-be hits, but these songs also show how creatively she fashions the shiniest parts of the ’80s, ’90s, 2000s, and 2010s into her own highly stylized sound. “Famous” bops along on a riff that nods to Cyndi Lauper’s “Girls Just Wanna Have Fun”; there’s a bit of Elastica in “Breaking Up”‘s buzzsaw guitars and flirty put-downs; “Caught in the Middle” could be vintage Gwen Stefani; and “Doing It”‘s retro dance-pop feels equally informed by XCX’s own fascination with the ’90s and HAIM’s update on that decade. Similarly, Charli still exudes plenty of sass on Sucker, but the exact kind of attitude has changed. She retrofits some of True Romance’s atmosphere on “Boom Clap,” turning it into a sparkly anthem to young love that seems more innocent than it actually is. If she was trying to keep up with the hip kids before, now she sounds like an older sister sharing her tricks on “Break the Rules,” where she’s literally too cool for school. Anytime it feels like XCX may have oversimplified her sound — like the notable absence of one of her finest singles, “Superlove” — she proves otherwise. There’s a realness to her writing no matter how shiny the album’s surfaces are, and while these songs are influenced by the success she’s had with others, she’s saved her most personal songs for herself. It’s hard to imagine any of her collaborators or contemporaries belting out a lyric like “When I’m driving down the wrong side of the road, I feel like JFK you know” with as much mischievous glee as Charli does on the standout “London Queen”; later, she states her independence, sexual and otherwise, on “Body of My Own.” From song to song, she bounces from hanging out in her friends’ bedroom to flying on private jets, making both sound like the coolest possible thing to do. Sucker’s mix of youth and sophistication is more than a little volatile, and sometimes it feels like XCX is still figuring out what really works for her music. Nevertheless, it succeeds as an introduction to Charli XCX the Pop Star while retaining her whip-smart songwriting and attitude.