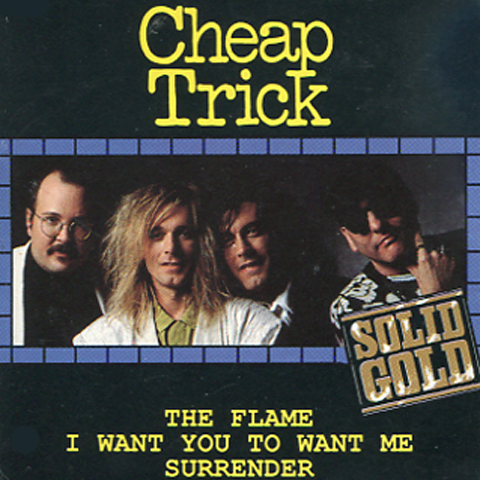 In 1988 Cheap Trick released their comeback album Lap Of Luxury and it features their formula of 80s pop-metal. One of their singles, the power ballad The Flame, gave the band’s first number one hit. The track was written by British songwriters Bob Mitchell and Nick Graham and was first offered to English singer Elkie Brooks, who turned it down. The Flame reached number one on the Billboard Hot 100 in July 1988, also reached number one in Australia and Canada. Reportedly, the band disliked the song at first; Rick Nielsen disliked the song so much on first hearing that he yanked it from the tape player and ground the cassette beneath his boot heel. In an interview with Gerry Galipault, Cheap Trick drummer Bun E. Carlos stated: “Tom Petersson rejoined in 1988, and then the vice president at Epic Records told us he had these two songs and they’re both gonna be #1. He goes, ‘We got one for you and one for the group Chicago, but you can have first choice.’ He said, ‘I think the one ‘The Flame’ would be good for you guys.’ The other one was ‘Look Away,’ and it sounded like some girl singing on the demo. We really didn’t like that song anyway, so ‘Sure, we’ll do ‘The Flame.’ We’re game.'” The success of “The Flame” brought the group out of a years-long commercial slump and back into music industry prominence.