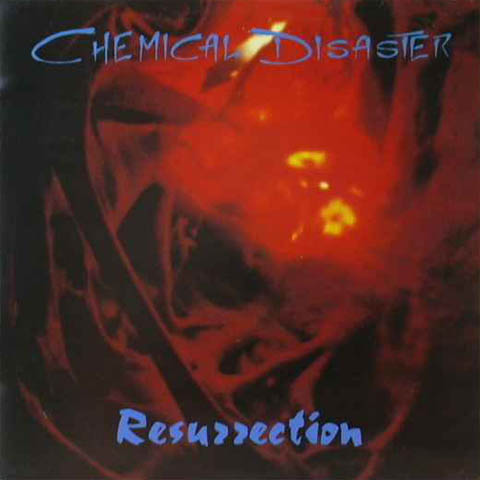 An early Brazilian Death Metal band formed in Santos in Sao Paulo in 1990. Santos was also the birth place of Vulcano and Psychic Possessor and following these bands several line-up changes you will notice that many of the members were borrowed for each others different projects throughout their life span. Chemical Disaster released several demos before getting signed to Cogumelo records who released their debut album Resurrection in 1993. This album plays along with chunky death metal at points, with plenty of slow palmed muted sections and some mid-paced as well. The vocalist uses varying techniques with a disguised voice. On occasion a deeper growl, changing it up in nasally fashion, and also with more of a hoarse strain on his throat as well. He interchanges the speed too: such as extended growls, and gruffs in quick gasps that match the notes more so. Resurrection mixes enough variables into a single equation that if I was a math major I would be intelligently telling you how that works adequately. This is early 90’s death metal with chug, harmonic squeals and growls like the rest. Yet Chemical Disaster bring to the table an engaging debut that doesn’t just stick to one concentration. Instead of flaunting chunky notes in your face to be gobbled up as quick snacks for the mentally slow. This output is like short meals that bring out a thirst and hunger, while eventually quenching as a whole. Their constant line-up problems continued after this album and it seems like the band almost called it a day, but several years later they began to rebuild themself slowly. They wrote some new material and also re-recorded two tracks, Sexual Maniac and The Sinner, from their debut for the comeback album Scraps Of A Being that were relased in 2000.