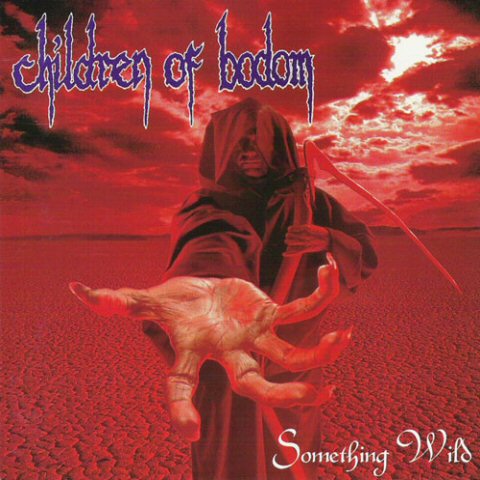 Extremely rare first press on Spinefarm with a hidden bonus track and a completely different band logo. The hidden eight track is just 10 seconds of silence and was named ‘Bruno The Pig’ by the band. The title isn’t written on the cover and both Spinefarm and Nuclear Blast didn’t appreciate the track and it was erased on all later pressings Children of Bodom came out of the heavy metal starting blocks in fine form. The group’s debut, Something Wild, attracted much attention, as many listeners and critics marveled at the bandmembers’ technical abilities, while others described Children of Bodom’s music as fluffy and trite. Ultimately, the Finnish group’s success within the commercially limited confines of progressive black metal quelled many naysayers, but not before the band received a few harsh reviews. With the huge amount of metal being released in Europe and America — and practically no radio outlets — good critical response was essential for late-’90s artists like Children of Bodom. And although some weren’t impressed by the shifting arrangements and sparse keyboards of Something Wild, others refused to deny the musical accomplishment of the debut. Later studio efforts benefited from superior production, but Something Wild contains plenty of essential material and performances. Jaska Raatikainen’s drumming propels much of the album, especially during the strong middle section of “Red Light in My Eyes, Pt. 1” and “Pt. 2” and “Lake Bodom.” One negative factor is the short playing time of Something Wild. At around 32 minutes, this record (and all of the group’s studio efforts) plays more like an EP than a full-length. But considering the lack of filler material, Something Wild still contains more than its share of impressive metal.