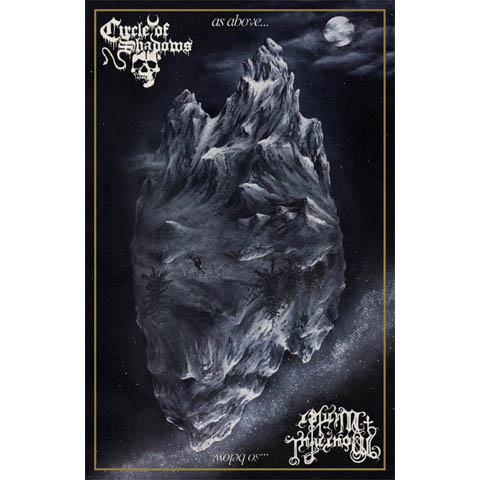 Circle Of Shadows / Mournful Winter ‎–As Above So Below MC

Split cassette between the ancient black metal act, Circle Of Shadows, from Austria, a side project by Persecutor from Triumphant and the German black metal horde Mournful Winter. Circle Of Shadows opens the tapes with. Some Are Born To Endless Night, that quickly builds up its driving rhythm to become a rather fast track topped with a nice croaking vocalist. Mournful Winter might be the better known of the two bands and their side opens with an instrumental that takes you into a bitterly angry and melancholic track that is, Through The Eternal Skies Of Transience. Mournful Winter often writes about the melancholic site of existence so to see that they have included a Katatonia cover doesn’t come as that much of a surprise. They have added some reverberation to the voice to make this track even spookier than the original. There’s also an Inquisition cover here but the strongest track is none of the covers but their own track, The Eclipse Of Solitary Woodlands, where the band goes from slow to fast and back to the slow passages again. They show a lot of variety in this songs that makes it one of the more interesting ones on the tape. So overall a successful split and even if you buy this one because you like Mournful Winter its still a major possibility that you will become a Circle Of Shadows fan too.