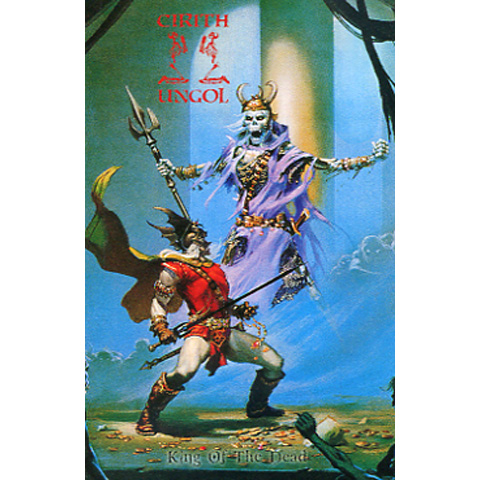 King Of The Dead, Cirith Ungol’s second album, is actually something of a step backwards from Frost and Fire; the production sounds a little muddier, the song structures less focused, and the hooks less apparent. “Hooks,” of course, refers mainly to the guitar riffs, because vocalist Tim Baker still hardly ever steps out of his shrill sing-speak delivery, which listeners generally find either deliciously evil or overdone and irritatingly silly. Cirith Ungol is actually a pretty ambitious band, but they’re also somewhat amateurish and cartoonishly over-the-top. Those aren’t necessarily reasons to dismiss their music, since bands like Venom and Celtic Frost — who were generally critically reviled during their existence — actually planted the seeds of the death metal revolution; however, Cirith Ungol doesn’t have Venom’s extremity or Celtic Frost’s restless experimentation going for them, and they don’t have the songwriting chops to make up for those deficiencies. It’s apparent on King of the Dead that Cirith Ungol had a great deal of potential, but they don’t bring it together here.