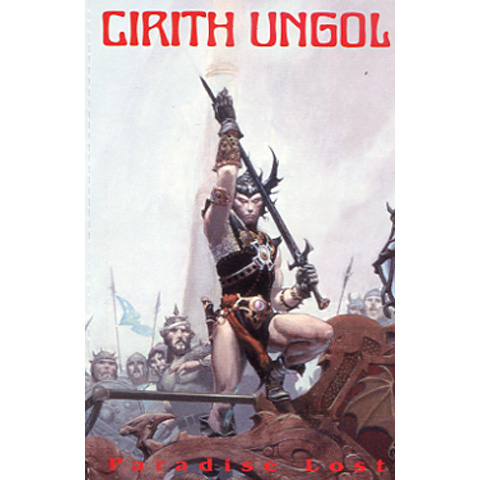 Ever exiled to the fringes of the ’80s heavy metal scene, Los Angeles’ Cirith Ungol limped to the end of their troubled career with 1991’s rather fittingly named Paradise Lost — their fourth and final long-player in a decade’s work. Unfortunately, very few music fans even cared by then, which was an especially tragic state of affairs since Paradise Lost was a far stronger outing than 1986’s One Foot In Hell (1986), and matched improved sound quality and musicianship to the classic/doom adventure metal songwriting of early efforts, Frost And Fire (1981) and King Of The Dead (1984). Coincidentally, half of the band’s line-up had turned over during their five-year absence (the band had actually split up for a time), and so long serving members Jerry Fogle and Michael Flint had been replaced with guitarist Jim Barraza and bassist Bob Warrenburg, respectively. But original drummer Robert Garven was back, along with vocalist Tim Baker, whose unmistakable gravely whine was always Cirith Ungol’s most recognizable asset — love it or hate it. In the case of Paradise Lost, there was slightly more to love than hate, including career topping metal anthems like “Join The Legion,” “The Troll,” and the foreboding riffing omnibus of “Chaos Rising” that handily overpowered weaker moments like the tediously dreary grind of “Before The Lash” and the overlong “Fallen Idols.” Surprises — both good and bad — also reared their heads now and then, including a competent cover of Arthur Brown’s perennial standard, “Fire” (the good), a misplaced stab at West Coast-flavored commercial hard rock named “Go It Alone” (the bad), and the Warrenburg-sung “Heaven Help Us,” which simply sounded too strange without Baker’s distinctive cries. The album’s memorable closing title track appeared to provide further evidence of Cirith Ungol’s healthy rebirth, but the band would in fact never record again, and it was later revealed that the sessions for Paradise Lost were in fact fraught with turmoil, spurred by unwelcome record company dabbling. In the end, the albums title had proved as sadly prophetic as one could fear, and Cirith Ungol’s career was indeed over at last.