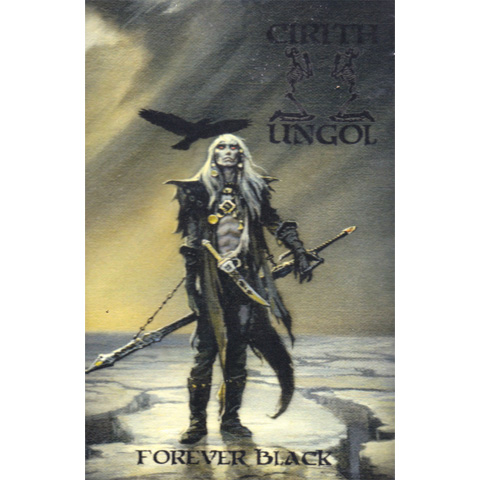 Forever Black is Cirith Ungol’s first collection of all-new material in 29 years! Make no mistake: Forever Black is a classic Cirith Ungol album in every sense of the word. The trademark dark and foreboding riffs, pounding rhythms, and soul-searing vocal attack are instantly recognizable as the Kings Of The Dead. From a songwriting standpoint, Forever Black touches on all of the elements that make Cirith Ungol revered, from the exhilarating uptempo call to arms that is “Legions Arise” to the clever incorporation of past glories in “The Frost Monstreme” to the somber and dynamic “Stormbringer” to the primal chest-beating epic finale of the title track. Lyrically, Forever Black explores topics ranging from high fantasy themes to rallying cries for the legions to apocalyptic visions of burning fires, incarnate evil and jet- black darkness. The icing on the cake is the striking cover painting by Michael Whelan, whose magnificent visuals remain inextricably associated with Cirith Ungol. Simply put, Forever Black is a testament to Cirith Ungol’s continuing vitality and enduring primacy in the classic metal pantheon, more than four decades after the band’s inception. It is a gift to the steadfast and growing legions of fans, old and new, who never faltered in their belief, who coaxed them out of retirement, and who have embraced them during the reunion years. It is a continuation of the Cirith Ungol mythology, a worthy and welcome addition to their daunting musical legacy. And it is a defiant fist to the face of any unbelievers who doubted Cirith Ungol’s unshakable resolve and burning dedication to their arcane and mysterious craft. As Robert Garven is fond of saying, Cirith Ungol remains “A Churning Maelstrom of Metal Chaos Descending!” Long may they reign!