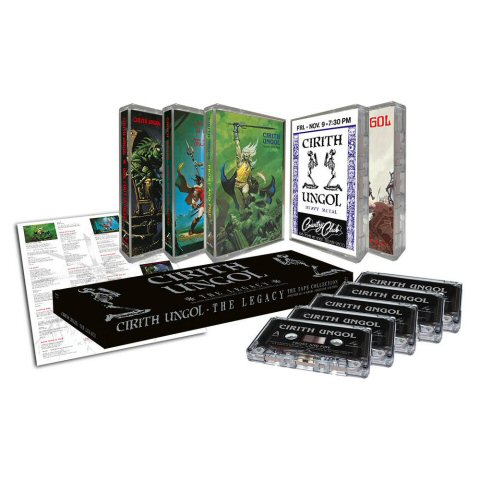 Box with all four studio albums plus “Live At Country Club 1984” on tape with poster and lyrics. Limited to 1500 copies

Frost And Fire
Frost And Fire, Cirith Ungol’s debut album, was a decent enough attempt at sword-and-sorcery fantasy metal, and in some ways can be seen as a precursor to the bleaker, more influential work of Celtic Frost. Tim Baker is not the most melodic of vocalists, favoring a theatrical sing-speak for pretty much the entire record, but the band’s music is often strong enough to support him. That isn’t true for the entire album, as some of the compositions tend to meander, but if Baker’s style isn’t a problem for you, Frost and Fire will be a sporadically enjoyable record that may very well be worth your time.

King Of The Dead
King Of The Dead, Cirith Ungol’s second album, is actually something of a step backwards from Frost and Fire; the production sounds a little muddier, the song structures less focused, and the hooks less apparent. “Hooks,” of course, refers mainly to the guitar riffs, because vocalist Tim Baker still hardly ever steps out of his shrill sing-speak delivery, which listeners generally find either deliciously evil or overdone and irritatingly silly. Cirith Ungol is actually a pretty ambitious band, but they’re also somewhat amateurish and cartoonishly over-the-top. Those aren’t necessarily reasons to dismiss their music, since bands like Venom and Celtic Frost — who were generally critically reviled during their existence — actually planted the seeds of the death metal revolution; however, Cirith Ungol doesn’t have Venom’s extremity or Celtic Frost’s restless experimentation going for them, and they don’t have the songwriting chops to make up for those deficiencies. It’s apparent on King of the Dead that Cirith Ungol had a great deal of potential, but they don’t bring it together here.

One Foot In Hell
After the release of King Of The Dead Cirith Ungol had gathered enough interest to get signed by a larger label: Metal Blade. Such deals are sometimes two-edged swords, while this ensured better production values, Metal Blade put the dogs of hell on a short leash diminishing the artistic freedom for the creative and innovative band. The music suffered a deficit of proper cirithungolism as it was molded to get a more mainstream sound for a larger market. Gone are most of the vintage roots from the 70’s, instead the sound is more similar to the contemporary normal Heavy Metal bands. Whether this was a decision made by the band or if the label is behind it I do not know. Thankfully Tim Baker’s raspy gnarl still evokes some mysticism and ensures that the band remains obscure but much of the old magic vibe is gone. Fortunately, even if somewhat crippled by the new label, Cirith Ungol hadn’t lost all their steam. The songwriting was still more or less top notch (100 MPH was written as early as 1980 when Greg Lindstrom was still in the band but the rest of the material is newer, the old version of 100 MPH can be heard on the compilation ‘ Servants of Chaos’) even if the song structures are less complex and awe-evoking. The pace has been upped since the doom-laden King of the Dead, not a huge surprise taking in consideration it’s 1986, the grand year of Thrash Metal. Whether or not it was progress is questionable but it was a rather logical evolutionary step. With that said, there are still a couple of slower doomy songs (Chaos Descends and Doomed Planet) but most of the material is now mid-paced and occasionally Cirith Ungol steps into Speed Metal territory (well, not quite, but compared to the other songs, 100 MPH is pretty damn fast). Although, without doubt, a weaker album than the predecessor, it’s a still a very worthwhile album, especially for Cirith Ungol fans.

Paradise Lost
Ever exiled to the fringes of the ’80s heavy metal scene, Los Angeles’ Cirith Ungol limped to the end of their troubled career with 1991’s rather fittingly named Paradise Lost — their fourth and final long-player in a decade’s work. Unfortunately, very few music fans even cared by then, which was an especially tragic state of affairs since Paradise Lost was a far stronger outing than 1986’s One Foot In Hell (1986), and matched improved sound quality and musicianship to the classic/doom adventure metal songwriting of early efforts, Frost And Fire (1981) and King Of The Dead (1984). Coincidentally, half of the band’s line-up had turned over during their five-year absence (the band had actually split up for a time), and so long serving members Jerry Fogle and Michael Flint had been replaced with guitarist Jim Barraza and bassist Bob Warrenburg, respectively. But original drummer Robert Garven was back, along with vocalist Tim Baker, whose unmistakable gravely whine was always Cirith Ungol’s most recognizable asset — love it or hate it. In the case of Paradise Lost, there was slightly more to love than hate, including career topping metal anthems like “Join The Legion,” “The Troll,” and the foreboding riffing omnibus of “Chaos Rising” that handily overpowered weaker moments like the tediously dreary grind of “Before The Lash” and the overlong “Fallen Idols.” Surprises — both good and bad — also reared their heads now and then, including a competent cover of Arthur Brown’s perennial standard, “Fire” (the good), a misplaced stab at West Coast-flavored commercial hard rock named “Go It Alone” (the bad), and the Warrenburg-sung “Heaven Help Us,” which simply sounded too strange without Baker’s distinctive cries. The album’s memorable closing title track appeared to provide further evidence of Cirith Ungol’s healthy rebirth, but the band would in fact never record again, and it was later revealed that the sessions for Paradise Lost were in fact fraught with turmoil, spurred by unwelcome record company dabbling. In the end, the albums title had proved as sadly prophetic as one could fear, and Cirith Ungol’s career was indeed over at last.

Live At Country Club
The name Cirith Ungol is pronounced “kirith ungol” and is an Elvish phrase meaning “pass of the spider”, which is something that Lord Of The Rings fans will surely recognize. The name is, of course, indicative of the band’s fantasy-oriented lyrics, themes and beautiful album artwork. This recording was made on the 9th of November 1984 at the band’s performance at Wolf And Rissmiller’s Country Club. Garven J has commented: “This recording was never meant to be released. The audio was taken off the mixing console. As we were an opening act, we had little or no sound check, room on stage, and restricted access to the lighting and sound. Regardless, this rare and primitive recording is one of the few ever taken of the band”. Cirith Ungol have a unique sound which is hard to pigeonhole. A bit of doom, traditional heavy metal, melodic rock and sprawling instrumentals. This live recording is very warts and all but has become an important piece in the history of the band and shows what the band were live and with Tim Baker sounding as manic as in the studio.