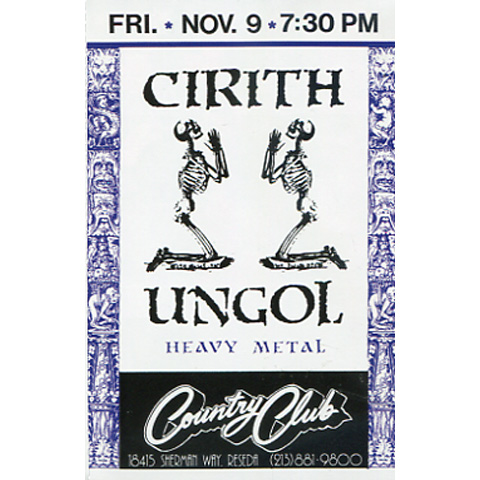 The name Cirith Ungol is pronounced “kirith ungol” and is an Elvish phrase meaning “pass of the spider”, which is something that Lord Of The Rings fans will surely recognize. The name is, of course, indicative of the band’s fantasy-oriented lyrics, themes and beautiful album artwork. This recording was made on the 9th of November 1984 at the band’s performance at Wolf And Rissmiller’s Country Club. Garven J has commented: “This recording was never meant to be released. The audio was taken off the mixing console. As we were an opening act, we had little or no sound check, room on stage, and restricted access to the lighting and sound. Regardless, this rare and primitive recording is one of the few ever taken of the band”. Cirith Ungol have a unique sound which is hard to pigeonhole. A bit of doom, traditional heavy metal, melodic rock and sprawling instrumentals. This live recording is very warts and all but has become an important piece in the history of the band and shows what the band were live and with Tim Baker sounding as manic as in the studio.