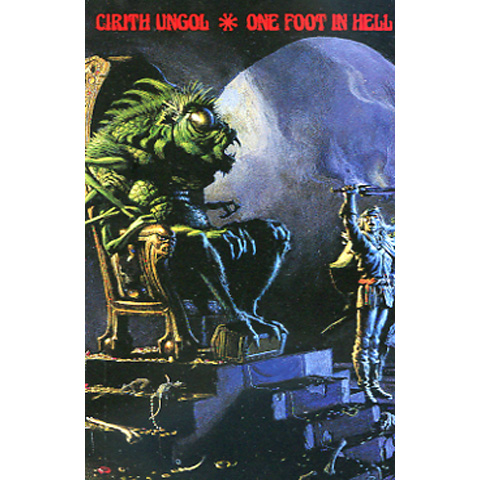 After the release of King Of The Dead Cirith Ungol had gathered enough interest to get signed by a larger label: Metal Blade. Such deals are sometimes two-edged swords, while this ensured better production values, Metal Blade put the dogs of hell on a short leash diminishing the artistic freedom for the creative and innovative band. The music suffered a deficit of proper cirithungolism as it was molded to get a more mainstream sound for a larger market. Gone are most of the vintage roots from the 70’s, instead the sound is more similar to the contemporary normal Heavy Metal bands. Whether this was a decision made by the band or if the label is behind it I do not know. Thankfully Tim Baker’s raspy gnarl still evokes some mysticism and ensures that the band remains obscure but much of the old magic vibe is gone. Fortunately, even if somewhat crippled by the new label, Cirith Ungol hadn’t lost all their steam. The songwriting was still more or less top notch (100 MPH was written as early as 1980 when Greg Lindstrom was still in the band but the rest of the material is newer, the old version of 100 MPH can be heard on the compilation ‘ Servants of Chaos’) even if the song structures are less complex and awe-evoking. The pace has been upped since the doom-laden King of the Dead, not a huge surprise taking in consideration it’s 1986, the grand year of Thrash Metal. Whether or not it was progress is questionable but it was a rather logical evolutionary step. With that said, there are still a couple of slower doomy songs (Chaos Descends and Doomed Planet) but most of the material is now mid-paced and occasionally Cirith Ungol steps into Speed Metal territory (well, not quite, but compared to the other songs, 100 MPH is pretty damn fast). Although, without doubt, a weaker album than the predecessor, it’s a still a very worthwhile album, especially for Cirith Ungol fans.