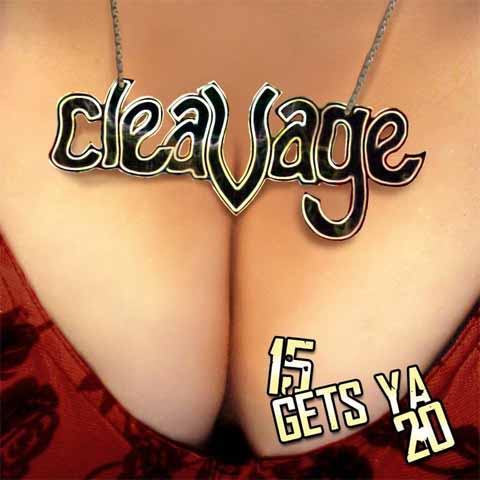 Cleavage was the brain child of Hollywood Tease guitarist and songwriter Larry Ganci. In the late 80’s Hollywood Tease was the first hard rock band to be signed to the famous rap label Sugar Hill Records and their independent offshoot Bon Ami Records. As the record label was going through a transition, Larry started a cover band called Cleavage with members of a band he was producing. Cleavage, the cover band with Larry Ganci as singer/front man included, Mike Hensinger (bass), Paul Riario (guitar), and Rob Tarantino (drums) soon to be replaced by George Pagonis. This line-up played covers locally for about a year and quickly built a following. Larry, the prolific songwriter, continued to write, engineer and produce original songs in his privately owned rehearsal/recording studio located in Paterson, NJ. As he was having fun and gaining popularity as the front man, he wanted to make Cleavage a real hard rock band. Converting from covers to all originals required a personnel change, and after some line-up changes they started to write and recordng and soon released the infamous self titled release The Demo to rave reviews. Show attendance quickly increased, and at the same time local Radio stations WSOU (Seton Hall) and WDHA were playing Cleavage regularly. 15 Gets Ya 20 held the #1 Local spot for several weeks in a row on WSOU. Within one year Cleavage became the headliner and local opener for national acts. Cleavage then signed to Southside Management and began showcasing at sold out venues such as the famous China Club in NYC. Although they drew major label interest, it was the early nineties and the Seattle sound became the focus of the Music Industry’s attention. The band decided to go their separate ways but still remain friends to this day. In the months following the disbanding Larry and Scott went on to finish up recording some previously unreleased Cleavage songs with Joe Osso (guitar), Steve Ceragno (guitar). Now two Cleavage cds sees the light of day, 15 Gets Ya 20 and Xoxo, featuring material from those glory days.